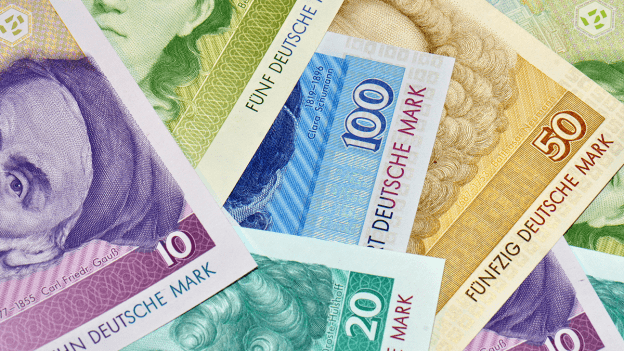 The first unification of Germany as a country happened in 1871 with the first true Deutschemark banknote. The second unification was in 1990 when Communist East German (called the German Democratic republic) and Democratic Western Germany (called the Federal German Republic reunified to form one German nation. It was less a merger of equals and more an acquisition by the West of the East part of Germany. As a result, all of Germany could use the Deutschemark.

After the defeat of Germany in WWII, Germany was partitioned into 4 parts. England, France , the US and Russia each controlled a sector of divided Germany. In 1949 the UK, French and US parts merged into one nation. Later that year, the Russia-controlled area became East Germany. The partition was always intended by the Western powers to be temporary. In this case, temporary meant 40 years and required the fall of the Soviet Union. Reunification was feared by some European countries- not just because Germany had been an aggressor in two major wars, but also because countries like France feared the economic strength of a unified Germany. France only gave its support when the new Germany agreed to join the European Commission and commit to a single economic union and currency.

Germany and its Bundesbank were already a strong economic force in Europe. While the committed to am transition to the Euro, Germany had 10 more years with its beloved Deutschemark.

Design of the Deutschemark

West Germany had just introduced a new series in 1989 (issued between 1989 and 1992). These were all printed by Bundesdrukeri (The Bundesbank’s printer). This series has the same typical design layout as many other European banknotes of the time. All of the notes were different sizes and colors. The front of each note had a large white area on the left for the watermark, a large intaglio portrait of a famous German, and an offset print highlighting local history and buildings. The reverse shows a large image relevant to the person shown on the portrait. These are all beautiful. It is hard to choose a favorite. The 200 is appealing because it has Paul Ehrlich- a Nobel Prize winning Jewish physician on the front and a microscope on the back.

The Bundesbank did upgrade several of the transactional banknotes with holographic patches – the 50, 100 and 200 mark. While the holograms were not especially unique, what is interesting is that the holograms have overprints and included a registered microprint around the patch. This was ahead of its time.

End of the Deutschemark

On January 1, 2002 the Euro begins to circulate in Germany. The Deutschemark and Euro co-circulated for 2 months and then marks could not be used for public transactions. The Bundesbank has guaranteed that all marks would be convertible to Euros and even 10 year later there were over 10 billion marks outstanding. It is likely that many people still have marks stashed in their homes and collections.