Argentina – From Leaders to Local Fauna 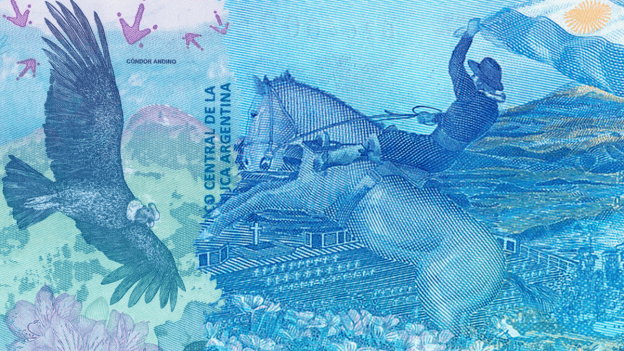 Argentina is a large and beautiful South American country with a long history. For many years, Argentine banknotes highlighted its historical and political leaders and also exuded national strength. The 4th series of banknotes issued between 2016 and 2018 was a departure from the traditional design theme. This series’ theme is local fauna, animals including jaguars, birds, guanaco, taruca and a whale.

The bright colors, choice of theme and portrait orientation is a significant departure from the previous designs. The series includes 6 denominations, starting at the Argentina 20 Pesos and going up to the 1,000 Pesos. In each banknote the animal is printed in intaglio and appears to be emerging from its natural environment printed in colorful offset. Each note also includes vivid flowers.

The designer appears to have had some fun with the designs. The see through feature on each note makes a footprint of each animal when you look at them with a light behind. Each note footprints that look like they are randomly printed, sort of like the animal accidentally walked over the paper. The Argentina 200 Pesos shows a whale, so the see through feature is not a footprint. It is the whale’s tale.

The banknotes have some additional unique features. For example under the small animal images there are small markings to help the blind differentiate each denomination. The higher denominations have windowed threads, while the 500 and 1,000 Pesos also have SICPA SPARK color shifting features. Some people might also notice that on the reverse of each note is an image of Argentina, which includes the Falkland Islands. The Falklands are a UK overseas territory, but Argentina disputes this and even fought a war with the UK in 1982.

The series won several awards for their designs from regional groups. In addition some of the denominations are even recognized by IBNS as the annual best notes.