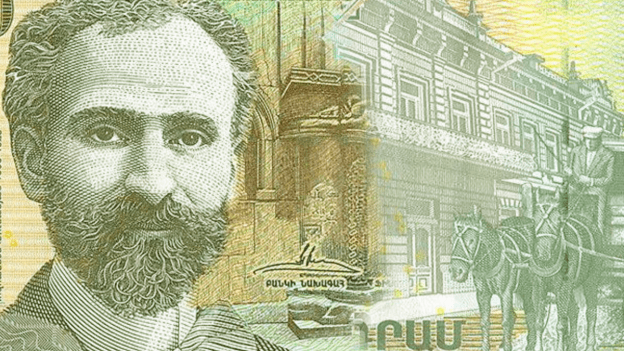 Armenia is a small country located in the land between Iran and Russia. It borders Turkey to west and Azerbaijan to the east. Its landlocked position has put it at a crossroads of civilizations for more than 3,500 years. It was one of the earliest regions to adopt Christianity as its primary religion. It has been dominated by its larger neighbors – Turkey and Russia as it was part of their empires. Armenians are a proud people with a strong diaspora spread across the globe by war and foreign occupation. The Ancient Armenian land contained Mount Ararat, the biblical resting spot of Noah’s Ark.

Armenia has had its own banknotes during its short lived independence after World War I and since 1993 when it became fully independent after the dissolution of the Soviet Union. Early Armenia banknotes were little more than basic pieces of paper without security designs of images. The third issue Armenian Ruble, printing in 1920 by Waterlow and Sons are beautiful and rare examples of blended Caucus and Middle Eastern designs. They are unusual and interesting. The 1920, 250 Ruble (P-32) contains an image of a woman spinning yarn on a background of sun or halo. The rest of the note contains strong structure features and security designs.

When Armenia broke from the former Soviet Union, and after it issued emergency Rubles, it began issuing Armenian ‘Dram’ notes, which similar to dirham means money. The first drams issued in 1993 looked a lot like former Soviet Union banknotes. That is boring and utilitarian. It wasn’t until 1998 that the banknotes began to look modern and interesting, at least to a collector. The banknotes followed a typical European look with a portrait of a famous person on the left side of the front and watermark on the left. Famous buildings and landscapes are on the reverse.

With each series, the banknotes have become more interesting and more secure. The 2018 series are exceptional examples of design and security. All denominations from 5,000 to 50,000 drams use Geisecke hybrid substrates and threads along with SICPA SPARK LIVE color shifting inks. Most denominations have portraits of famous Armenians and images that highlight its history and religions. What I also notice is that facial hair seems to be very common for these Armenian men. Maybe it is to show that Armenian men are pretty hairy? Not sure.

Armenia has issued 2 commemorative banknotes, 1 in 2001 to celebrate 1,700 years of Christianity in Armenia and a second in 2017 to commemorate Noah’s Ark. The 2001 note does not have a very interesting design. The 2017 note on the other hand is very interesting and possibly a bit overloaded with overt security features. The front includes the largest overt feature I have ever seen. It has 2 additional overt features- the thread and SICPA SPARK LIVE in a dove. The reverse shows a scene of Noah. I actually prefer the reverse. This banknote is unusual but very collectable especially of you can get it in the original folio from the bank. It might be a but gaudy, but it definitely is a good note to have in your collection.