Aruba Florin & Its Ties to the Kingdom of Netherlands 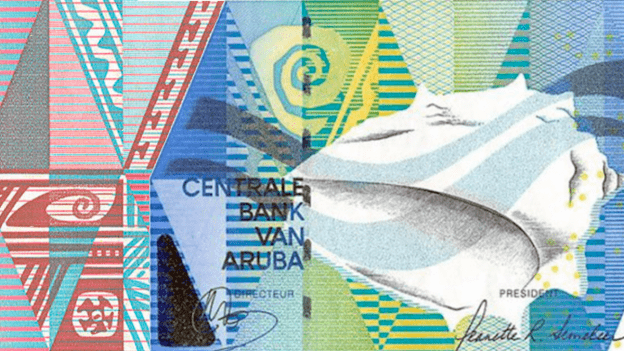 Lets start with the big tulip in the room. The Netherlands has a Kingdom? Yes; it contains Aruba, the Netherlands, Suriname, and the Netherland Antilles. Remember 500 years ago, the Dutch government was a naval powerhouse with colonies and strong trade routes. Aruba, located just off the coast of Venezuela is a strategic location to have access to South America and the South Atlantic. We will also discuss the Florin currency used in Aruba.

Unlike many Caribbean islands, Aruba has a dry climate. It also has oil reserves which made it even more interesting to the Netherlands. The local people worked from the 1970’s to gain independent status culminating in 1986 with its independence and the creation of the Netherlands Commonwealth.

Aruba issued its first banknotes in 1986. Printed by Johan Enschede, the first currency followed similar designs by this printer. In 1993, Aruba decided to make a bold statement with its banknote designs. For the next 25 years, the banknotes had geometric designs and squared off images of local animals and flora. These notes look to me like they were designed by a Cubist artist. The design are unique in all banknotes. Some people like them, and some don’t. To me, they don’t look like banknotes.

Aruba also created something pretty unique. It issued square coins. Typically coins are round so then can roll in coin acceptance devices. Aruba issued 50 cent and 5 Florin square coins

In 2019, the Central Bank of Aruba made a other bold choice. In my opinion, they created one of the best series of banknotes ever. The notes look like banknotes and contain interesting and secure designs. The banknotes have a portrait orientation and contain the most advanced Crane overt security features and SICPA SPARK LIVE.