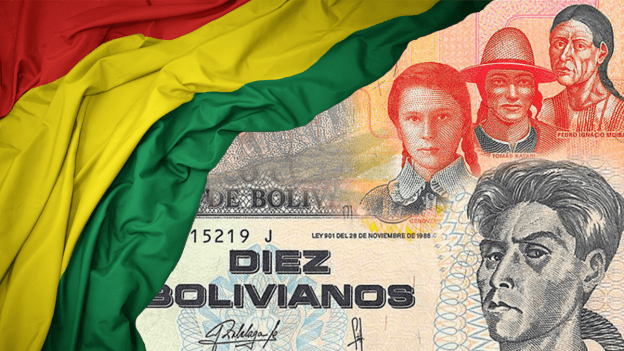 Many nations in South America fought for and won their independence from Spain in the early 1800s. Simon Bolivar is considered by many as ‘The George Washington’ of South America. He is an important leader and a hero to many countries. ‘El Libertador’ in Venezuela and the namesake of the Republic of Bolivia, now called The Plurinational State of Bolivia. As a result, the revised name gives recognition to the large number of indigenous people in the country.

Bolivian banknotes blend its revolutionary history, indigenous people and biodiversity. As a result, the 2018 “Animals” series is differentiated by the local animal that goes with each denomination. The 20 Bolivianos (P-249a) contains an alligator on the reverse both in an overt security feature and in an offset vignette on the reverse. Local historical figures are on the front. Also an interesting design aspect of this note is that the Bolivian flag colors are painted across much of the text.  The 200 Bolivianos (P-252a) includes an overt feature in a leopard image. On the front, Simon Bolivar is in the portrait of three people.

The current series is a significant departure from previous banknotes. For example, the 2001 and 2007 series were much more traditional. The banknotes are in a single color for each denomination. They contain a large portrait of a famous Bolivian. In addition they contained images of important government buildings.

Some of the more interesting Bolivian banknotes are from 1928. Waterlow & Sons is the printer. For example, the 1 Bolivar (P-128) has a very good design. It frames Simon Bolivar’s portrait with elegant line engravings. Also the reverse shows security rosettes surrounding the country emblem and several flags. It is a very patriotic and proud design. The latest series is a significant departure from the first Bolivian banknotes, they are nonetheless a modern homage to the history and culture of the Bolivian people.