Botswana – A Desert of Calm 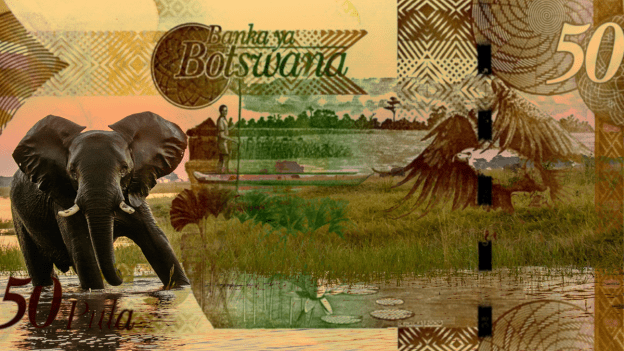 Botswana is a country in Southern Africa about the size of France. It is sandwiched between Zimbabwe, Namibia and South Africa. Its main characteristic is the Kalahari Desert which covers nearly 70% of the land. It is also Africa’s longest continual democracy and a rare oasis of civil calm in Africa.

Botswana’s currency is called the Pula, which means “rain”. For those who love etymology, this is a great connection. In a land where rain is precious, valuable and a blessing, naming your money after rain makes a lot of sense.

Botswana gained independence from Great Britain in 1966. The transition from being a colony to an independent country seemed to be smooth. In the early years of independence, Botswana established a democracy but was very poor and dependent on South Africa. Until 1976 it even used South African Rand as its currency.

Botswana Pula has maintained a relatively stable design concept throughout its history. The front of each denomination has a large portrait of leaders and the country coat or arms. The reverse show scenes of local flora, fauna and rustic scenes. In the initial series, the 10 Pula was the highest denomination and that showed an image of the central bank building.

Due in large part to its political stability and sparse population, Botswana has improved the economic situation of its people. Its prosperity is based on mining, farming and tourism. In 1979, Botswana introduced a 20 Pula and included a detailed scene of a mining factory. The 2000 100 Pula (P-23a) also shows an emphasis on mining. The front includes a latent overt image of a diamond and the reverse shows a mine plus a person inspecting a gem.

Botswana began to experience problems with poor banknote quality in circulation in the 2000s. However, this is not uncommon for countries where money doesn’t work its way back to a central bank where old notes can be removed from circulation. But the complaints about poor note quality led the bank to switch to polymer notes for the 10 Pula in 2018. Another note to point out is the 2014 200 Pula (P-34d). The portrait shows a local woman reading with children. Also, the reverse shows several zebras. It is an attractive note and a clear representation of the evolution of the Botswana people toward a modern education and inclusion of all its people.