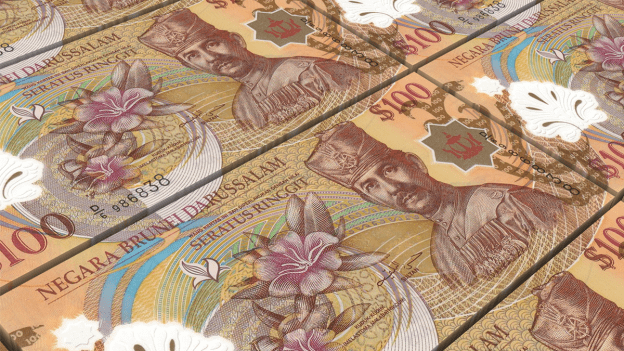 Brunei is a fascinating country in South East Asia. Its Ringgit banknotes are pretty, but maybe not very ‘interesting’ or unique. Let’s start with the name of the country. Officially, it is The Nation of Brunei, the Abode of Peace. That has to be the coolest name. Second, the country is split into two parts on a single island. There are some countries that are disconnected such as Turkey or Malaysia, but Brunei has 2 parts on the island of Borneo that are not connected. It is more similar to Germany between wars when East Prussia was separated from the rest of the country. More generally, it is absolutely amazing that the country exists today as an independent country.

Brunei is a sultanate and has been an independent country since 1984. In the distant past it the country covered much more of the island of Borneo. It had fought off Spanish interest in the country and then in one of the weirdest twist of history, it ceded some a region called Sarawak to a British citizen, James Brooke and another part of the island to the British North Borneo Charter Company. This solidified the relationship with the UK and in 1888, Brunei became a British protectorate. In essence, Brunei seemed to trade land for peace and protection. After WWII, while many other countries fought for its independence, Brunei stayed an overseas territory into the 1980s. Brunei does have energy resources which has helped it become a developed nation.

Brunei issued its first Ringgit banknotes in 1967 while it was still British Overseas Territory. Unlike most other territories, the Queen was not present on the banknotes. Instead, the banknote had the portrait of Sultan Omar Ali Saifuddin II, the 28th ruler of Brunei. The banknotes were printed by Bradbury & Wilkinson so they are beautiful, but they are generally unremarkable. There are images of large mosques on the reverse though. The country issued its first post independence series in 1989, 5 years after independence. Again, the banknotes were typical of the period.

In 1992 a commemorative Ringgit note was issued. It was a 25 Ringgit (or Dollar) Issued on the 25th Anniversary of Sultan Hassan al-Bolkiah I’s Accession to the Throne. This note is colorful and has a unique image on the reverse depicting the ascension ceremony. It is a very collectable banknote. Brunei converted to polymer banknotes, printed by Note Printing Australia in 2004. Each of the notes from then until today have been colorful with large windows, flowers on the front and buildings on the back.

Many of the notes have become nearly monochromatic and therefore a little less interesting. The 2007 Commemorative B$20 note (P-34b) stands out as one of the best banknotes issued by Brunei.  It is polymer and commemorate 40 years of Currency Interchangeability between Singapore and Brunei. The banknote contains famous sites from both Brunei and Singapore and might be the only note that contains the name of a separate country on it. The colors are great, and the national emblem really pops.

Brunei seems like a modern, eco-diverse tropical paradise. While a few of the banknotes are equally interesting, many are a bit drab. It would be good to see the banknotes take on the interesting and colorful aspects of its currency partner Singapore.