Burma (Myanmar) Kyat – Past to Present 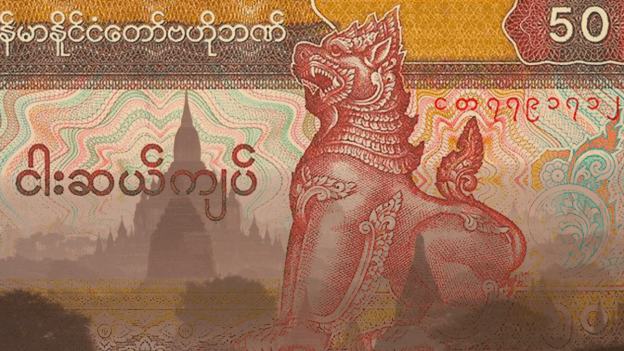 Burma is the largest country is Southeast Mainland Asia. Its name was changed to Myanmar in 1989, but the actual naming is still contested and debated by its citizens. Here we will focus only on Burmese banknotes.

Burma can trace its history for more than 1000 years. The current country was a British colony beginning in the mid 1800s and was closely associated with the Indian colony. Lack of respect for local Burmese people, customs and especially religion led to frequent clashed. In 1937, Burma became a separate colonial administration area and was on its way to independence. Until 1937, Burma’s banknotes were issued by the Bank of India. In 1937, Burma did get its first banknote – a 5 rupee (P-1a), although it was still an Indian design with only a stamp of ‘Legal Tender Only in Burma” on the front and back side. However in 1938, the designs are changed and ‘BURMA’ was integrated into the design although the banknotes were still issued by India. In addition, King George VI replaced King George V on these notes.

Imperial Japan invaded Burma in 1942. Resentment over colonial British rule divided the country. Some Burmese sided with the Japanese and some with the British. Japan issued occupation notes in 1942, replacing the Indian notes. These occupation banknotes are often sought by many types of collectors. These banknotes including the 1942 ½ Rupee (P-13) have simple designs with JAPANESE GOVERNMENT on the front. This note does have images of Burmese pagodas on the reverse side. The 1 rupee from this series (P-14) is attractive and a more complete design.

Burma was decimated by the fighting during WWII. Burma went back to the India banknotes with Burma overprinting once the Japanese forces were pushed out of Burma. Some of these notes showed King George VI facing forward and some facing sideways. It is unusual to have such different portraits on the same series.

On January 4, 1948 Burma became an independent republic, but did not become a member of the British Commonwealth. Shortly after independence, Burma issued its own currency, still the rupee. The first independent series included a 10 rupee (P-36) that has a great image of an elephant on the reverse side. The printer is by De la Rue. In 1952, The Bank of Burma issued its first series of Burmese Kyat. Elephants remained a prominent component on the banknotes. In 1958, a complete series of Kyat are put into circulation. The designs took on a more military theme showing General Aung San on the front of each banknote.

Burmese banknotes experienced significant changes in 1972 when Burma set up its own banknote printing site. German company, Giesecke & Devrient, was responsible for operating it. As a result, the designs became more colorful and complex. Burma continued to be led by the military under a socialist government which caused significant poverty, oppression and a black market throughout the country.

In 1985, the government abruptly demonetized its older banknotes and issued a new series with very unusual denominations. The bank issued 25, 35, and 75 Kyat banknotes, but then 2 years later demonetized these and issued 45 and 90 Kyat banknotes. These actions destroyed the savings of many Burmese and threw the country into chaos leading to another military coup d’etat. As a result ,the 45 and 90 Kyat banknotes were of poor quality and were not durable in circulation. But they were the last ‘Burmese’ banknotes as the country changed its name in 1989 and issued Myanmar Kyats from the Central Bank of Myanmar.