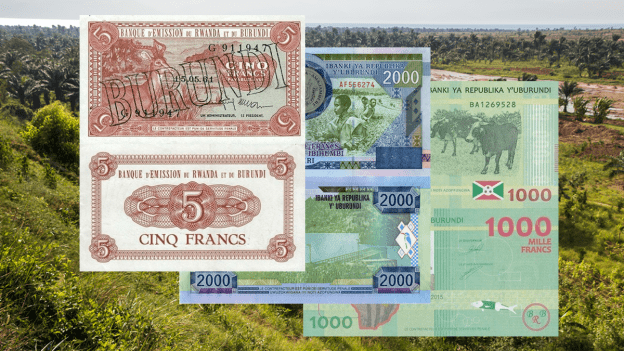 Many countries in Africa contain the scars of European Colonization and tribal conflicts. Burundi is a small landlocked country in the center of Africa that has many of these scars.

Burundi had historically been a monarchy of the Hutu and Tutsi peoples. It laid at the intersection of German, Belgian and British colonial influence, and traded hands from the mid 1800’s to World War I. After WWI, Belgium established dominance over Rwanda and Burundi and created some level of local government structures. During this time, the Belgian franc was the currency of the colony called Ruanda-Urundi which included the areas of modern-day Rwanda and Burundi. Burundi eventually gained independence from Belgium on July 1, 1962.

Evolution of its Own Banknotes

Burundi, like its neighboring countries is extremely poor and has little in the way of natural resources. Its 11 million people live mostly in poverty and survive on subsistence farming. At its beginning, it could not afford its own banknotes. Burundi’s first banknotes were actually Rwandan banknote with an overprint stating, ‘Legal Tender in Burundi’. In 1964, the first banknote was a 5 Franc (P-1a). Later in 1964, Burundi issued its first banknotes including a 5 Franc (P-8a). These early banknotes did not have typical security features and looked more like coupons than banknotes, but they did show local people and features of the country.

Burundi has suffered through frequent civil wars, ethnic cleansing, and other strife. The lack of economic strength is seen in the relatively simple and low quality of its banknotes through the 60’s to the 80’s. Thomas De la Rue printed many of the Burundi banknotes and over time one can see more traditional security line designs and the use of buildings in the themes. The 1975 50 Franc (P-22a) is a nice, practical banknote. It contains an image of a musician plus designs typical of local artists. The reverse side contains a number of flowing security line structures that make it look much like a banknote.

In the late 1990s and early 2000’s the banknote designs evolved to contain more detailed vignettes of local people, land and cultural activities. The 1994 50 Franc (P-36a) shows this type of design theme. It also has a nice picture of a hippopotamus on the reverse.

The country’s banknotes changed again significantly with the 2008 series. While they were still printed by De la Rue, the banknotes took on a more Belgian-French feel with more pastel colors and almost painting like vignettes.

The 2008 5,000 franc (P-47) uses pastel blues and a detailed image of locals fishing on the reverse. The national seal is prominent on the front as is a latent image and a simple holographic patch. The 2015 series of banknotes use paper or hybrid substrates to be more durable in the harsh circulation conditions. The series also has a consistent design concept. The front show local animals, plants, and fish along with the Burundi flag and emblem. The reverse has large images of the shape of the country with a mixed image inside the outline. Each denomination is a different color. This series is the first complete, and well thought out set of banknotes sharing a single theme and design concept.

Burundi continues to have a lot of challenges, but their banknotes are modern and designed for the future.