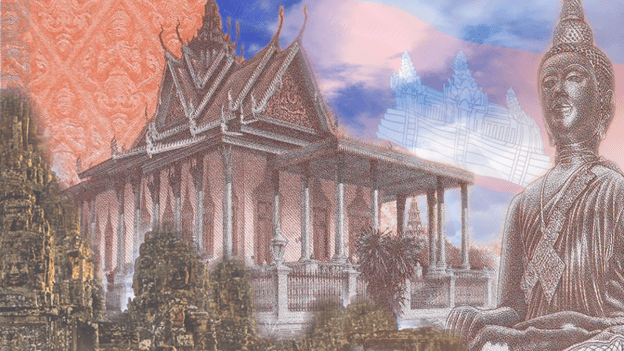 The Kingdom of Cambodia is a relatively poor country in Southeast Asia. It has a constitutional monarchy. It also has a prime minister which is the head of the government. Most people know very little about Cambodia. Sadly, its most known event in history is its involvement in the Vietnam war followed by the genocidal reign of the Khmer Rouge in the late 1970s. As it related to currency, Cambodia has uniqueness in that it did not have any currency from 1975 – 1979 because the Khmer Rouge outlawed the use of money. Other than that period, Cambodia’s currency is the Cambodia Riel, similar to Rial in use in many other countries.

Cambodia has used the Riel since it became independent from France in 1953. But its experience with its own currency was complicated because it was part of French-Indochina which split into Cambodia, Laos and Vietnam.  Initially its banking system did not have a good structured. One bank- the Institut d’Émission des États du Cambodge, du Laos et du Vietnam issued banknotes for all three countries – Riel in Cambodia, Dong in South Vietnam and the Kip in Laos. The Cambodian banknotes were dual denominated in Piastre and Riel; the Piastre being the name of the French Indochina currency.

The first Cambodia Riel series were very basic designs and small in size. Local buildings, landscapes and average people were present on the banknotes. After the Khmer Rouge no longer held power, the second Riel came into circulation. Interestingly, the second riel did not replace any currency so the government actually gave it away to its citizens to encourage its use. Most of the banknotes have King Norodom Sihanouk on the front and a famous Cambodian building on the back. The current series shows Naga, a mythical snake.

Cambodia Riel has experienced significant inflation over its history. In 1980 the highest denomination was 50 riel (worth about $12 USD). Today, it is 100,000 riel which is worth about $25 USD.