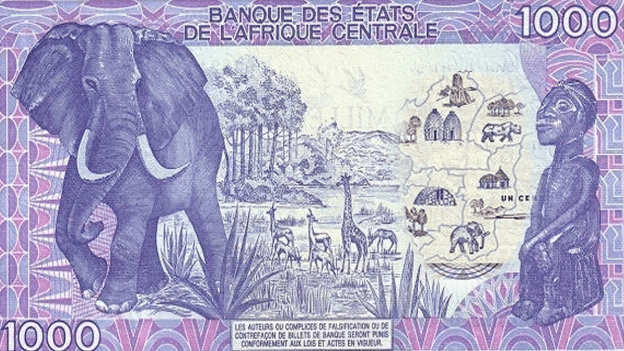 The Republic of Cameroon is a medium size country at the ‘armpit’ of Africa. It exists at the transition from North Africa to Central Africa on the western coast; right below Nigeria. Some people might remember Cameroon from its one football World Cup quarter finals in 1990. Others might know it from its current struggle against Boko Haram; a militant guerilla group in the region. Since 2017, Southern parts of Cameroon, which are more associated with the former British colony of South Cameroon, want independence and call the area Ambazonia.

Cameroon is a very poor country but does participate in the shared economic zone called CFA or Financial Cooperation of Central Africa. Like the Eurozone, countries in this region share banknote designs. Prior to 1993, the Cameroon banknotes were marked both as for the Republic of Cameroon (on the front) and as part of the Central African States Bank (on the reverse). In 1993, banknotes in region only showed Bank of Central Africa. Each country’s notes could be differentiated by a single letter printed on the note. In 1993, Cameroon was assigned the letter ‘E’. Chad, Central African States and Congo had to fight over the ‘C’. Congo got that and somehow Chad got ‘P’. Cameroon got ‘E’. To make things even more confusing, the letter assignments changed in the 2002 series, so Cameroon was assigned ‘U’.

Early Cameroon banknotes maintained the same French design style they used when they were a French colony. They were large, and used thin paper and bright colors to make scenes versus using portraits and building vignettes. The 1961 – 1,000 Franc (P-7) is interesting. It shows farmers at work in bright and detailed images. On the reverse there is a warning to counterfeiters that it is against the law.

The 1986 design is also very engaging. This note is primarily blue and has a strong, large portrait. It also shows the administrative districts in an outline of the country with images showing what each area of the country is known for. On the reverse is one of the largest and nicest images of an elephant. Anyone who collects banknotes with elephants must have one of these.

Evolution of the CAF

The 1st series issued exclusively by the Bank of Central Africa returned to the ‘French Style’ with more yellows and blacks. The 2002 series is a bit more interesting and have more colors and unusual images. They maintain the same design approach but some banknotes are yellow and some are blue. The 100 Franc (P-207) has some interesting aspects, especially the choice of animals and logging in the scenes.

Cameroon and its neighboring countries have not had a new design for more than 10 years. It would be good to see a new and more modern concept.