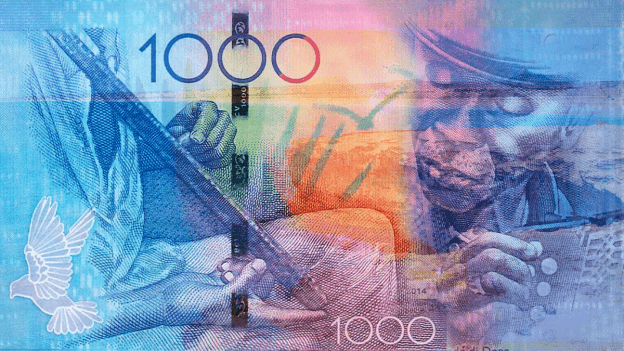 Cape Verde is a beautiful series of islands in the Atlantic Ocean a few hundred miles east of Africa. Its location made it useful during the African slave trade in the 1600s and 1700s. It was also useful as a stop over for shipping and tourism. It was even the first stop over for Charles Darwin’s voyage on The Beagle in 1832. More recently Cape Verde has been a big tourism destination due to its beautiful weather, low cost, ecosystem, and great beaches. Sadly, COVID-19 has severely affected the economy on the island.

Cape Verde was initially settled by the Portuguese. They were a dominant sea-going country at the time and so it made sense. Much of the country’s culture shows remnants from this origin. Cape Verde was a Portuguese colony or overseas territory until 1975 when it became independent. Its relationship with Portugal meant that the Ultramarino Bank in Lisbon was the issuing authority for Cape Verde banknotes.

Cape Verde, or locally Cabo Verde, has had some of the best designed banknotes for much of its history. Bradbury & Wilkinson was responsible for many of its banknotes in the first part of the 1900s. The 1941 100 Escudos (P-40) is a great example. The line patterns are intricate, and the engravings are very detailed. Like many banknotes of the time, the reverse side had a more open design that looked more like art than a piece of currency. Even in the 1970s when the designs were more ‘rectangluar’, Bradbury used a lot of thin line background printing to create a depth in the images. The 1971 20 Escudos (P-52) has on the reverse an impressive portrait of a woman overlooking a harbor. This is in the center and is framed by darker colored, symmetrical scroll work, numbers, and words.

After independence, Bradbury and Wilkinson continued to print banknotes for Cape Verde but, they were now issued by the Banco de Cabo Verde. The designs changed significantly and took on the more modern concept with a third dedicated to the watermark area, a third to the portrait and a third to offset printed thematic vignettes. More colors were also added. The 1977 100 Escudos (P-54) follow this concept. It also has an image of a volcano that dominates the reverse side.

The Bank has been ambitious with its designing. In 1999, they issued notes printed by De La Rue that were laid out in the portrait orientation. The 2000 Escudos from 1999 (P-66) looks more like the recent Venezuela series than the prior versions of from Cape Verde. They just don’t have a look of banknotes. The Bank must have agreed because the most recent series issued in 2014 returned to the previous overall layout. These notes were still printed by De La Rue but lowest denominations (200 Escudos) is printed on polymer.

The 2,000 Escudos (P-74) is stunning. The coloring is intended to mimic a sunset. On the reverse is an image of a large violin. The holographic stripe has old style microphones, and the see through features are of footprints. It is a beautiful and fun banknote that highlights many parts of the culture. It continues the long tradition of attractive and high quality banknotes designs typically seen from this island paradise.