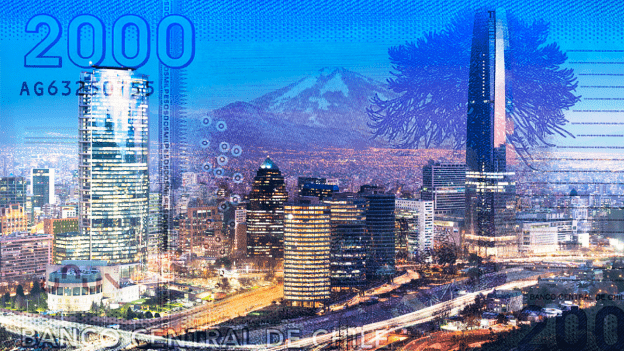 Chile is one of those countries that everyone can recognize just by its outline. It is over 2,700 miles long and about 200 miles wide at its widest point. The Andes mountains creates a dramatic barrier to its east which has enabled Chile to be relatively stable and prosperous. Read along to learn about Chilean banknotes.

Like most of South America, Chile was colonized by the Spanish and ultimately became independent in 1818 when most of the neighboring countries broke free of Spanish domination. Chile developed as a stable country until the mid 1900s with only some conflicts with its neighbors. Its stability and prosperity was lost as communists and conservatives clashed in government leading to a couple coups and the Pinochet Presidency from 1973 to 1990. The end of Pinochet’s reign was peaceful and enabled Chile to return to political and economic stability. Today, it is considered one of the most successful and developed nations in South America.

Because of its stability, Chile was one of the first nations in South America to print its own banknotes. Prior to 1918, Chile bought its banknotes from American Banknote, but in 1918 Chile’s Imprenta Fiscal Santiago de Chile began printing. The 1922 5 Peso (P-61) demonstrated that the local bank could design and print modern, high quality banknotes. The 5 is interesting because it has a bright yellow-orange background, several high resolution intaglio images. It did have a watermark in the center fold area, which is not optimal.

Evolution of their Banknotes

Not all banknotes were so interesting. The 1939 20 Peso (P-93) was also printed locally but it looks too much like a USD$20 design with a small portrait in an oval in the middle of the front and a vignette on the reverse.

In the late 1950’s Chile did see high inflation. This led the bank to demonetize the peso and convert to the Escudo at 1,000 pesos to equal 1 Escudo. In 1971 Casa de Moneda de Chile printed 500 Escudos (P-145) that are absolutely beautiful. Both sides have intricate, multicolored offset line work. The theme is mining which highlights the importance of mining to the Chilean economy. The front has a portrait of a worker with a hard hat and the reverse has the terraced remains of an open pit quarry.  The 1,000 escudo is similarly designed and interesting to inspect.

Chile was hit again with high inflation in the 1970s leading the bank to replace the escudo with the new peso at 1,000 Escudo to 1 new Peso. So over 20 years, the money devalued 1 million to 1. The first new peso series which was used from 1975 to 2009 were generally bright and colorful. The themes were also nationalistic. The 1975 10 Peso (P-150) has a military leader portrait on the front and a detailed vignette of a calvary charge on the reverse. Many of the notes in this series follow similar themes.

In 2007, Chile experimented with polymer banknotes on their 2,000 peso. They expanded the use of polymer in 2008-2009 with the introduction of a polymer 1,000 peso and 5,000 peso. The 5,000 peso has a light rose color and a nice portrait of national hero Gabriela Mistral. The reverse has images of a national park and an owl. There is also a large amount of microprint on this note. The 10,000 and 20,000 peso remain on paper and have advanced micro optic windowed threads as a primary security feature. This series nicely integrated paper and polymer into a single consistent concept.

You can purchase Chilean Banknote by clicking here.