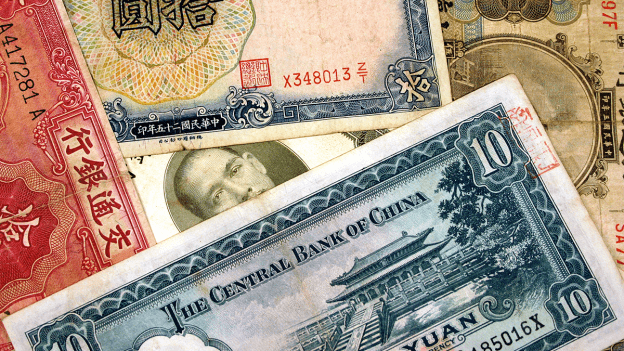 People have written books about China banknotes. To try to summarize all of the issuing authorities, printers, themes, etc. in a single blog is impossible to do the history justice. Instead, we can try to pick out a few of the most interesting from the hundreds of banknotes issued.

It is believed that China issued the first paper banknotes in the world. A banknote dated at 1368 might be the first Chinese Yuan. It is a piece of paper with writing and stamps confirming that some authority is standing behind paying the face value. In a time where paper, and ink were rare, this was probably sufficient to stop counterfeits. That and the threat of death. Like many other countries, it was merchants and railways that issued early banknotes. The 1899 China 1 dollar (yes dollar) (P-A59) was issued by the Imperial Railway and was printed in England. It shows a train on the front, and has a complex line design on the reverse.

In 1909 Ningpo Commercial Bank issued banknotes that are complex and beautifully designed. The 1 dollar (P-A61) had a goldish-yellow printed background with orange rosettes and black text. In 1913, after China became an independent republic, American Banknote printed Chinese dollars. The 1 dollar (P-30) has a portrait on the front, a watermark and the red-ink printed background that was common for many Chinese banknotes. The 100 dollar note in that series is also quite nice to look at. It is all green with some blue line work on the front. The reverse looks like it has a pagoda image. The 10 dollar note (P-29) is also really well designed. The engraving of a building on the front and complex security lines on the back are highly stylized and a great representation of the quality work done by American Banknote.

Several banks were still able to issue banknotes in China through the 1920s. The 10 Yuan issued by the Bank of Agriculture and Commerce (P-A115) shows a colorful image of farming in the forefront with a factory in the background. On the reverse is a more detailed image of the factory including details of smokestacks billowing. Another interesting banknote is the 1929 Shanghai Commercial Bank of China 1 Dollar (P-12). The background gold-yellow design on front and back provide a nice pallet for the dark text describing the banknote and also the full body portrait of a Chinese man. There is also an emblem with 2 opposing lions.

De La Rue also printed Chinese notes. The 1934 1 Yuan (P-71) issued by the Bank of China, shows an agricultural vignette on the front side and buildings on the reverse side. China was invaded by Japan in 1937 which had its impact on banknotes, inflation and the overall economy. Much higher denominations begin to circulate. During WWII in 1942, the Bank of China issued a 500 Yuan with a portrait of Chiang Kai Shek on the front. This was a very traditional looking banknote.

After WWII, the civil war between the Kuomintang and the Communist People’s Liberation Army heated up leading ultimately to the victory of Mao’s army and the US-backed Kuomintang fleeing to the island of Taiwan. They are some banknotes from the last days of the Kuomintang government. The Bank of China issued ‘gold Yuan’ theoretically backed by gold. The 500 Gold Yuan (P-409) is an example. Again, this is a traditional design with the portrait of a military man on the front (Chiang Kai Shek?) and government buildings on the reverse.

You can purchase Chinese banknotes by clicking here.