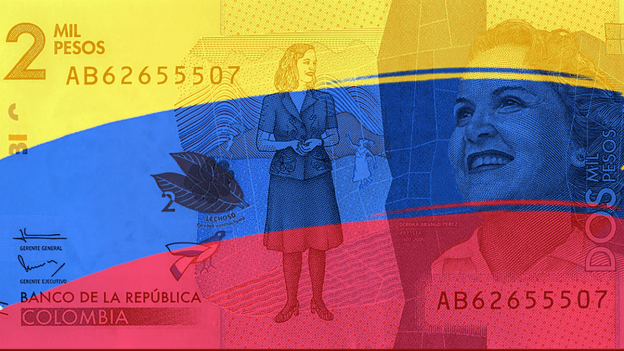 The Republic of Colombia is a large and influential country in the northern part of South America. Because of its location as the bridge between Central America and South America, its proximity to the Caribbean Sea and it span from the Amazon to the Andes to the beaches makes it unique and has influenced its history and culture. Its diversity is is a very integral part on their currency designs.

Colombia was one of the first areas in South America visited and eventually annexed by Europeans. Spanish explorers including those who accompanies Columbus landed in Colombia and searched for the city of gold. While Spain maintained the strongest presence and influence in the area, this was weakened in the early 1800s as nationalist aspirations led to a Declaration of Independence in 1810. With the eventual independence in 1818 along with much of the rest of the area. And like many other countries in the area, Simon Bolivar was a key figure in its fight for self-determination.

Colombia originally was much larger including parts of now Venezuela, Ecuador and all of Panama. Around 1900 as the US was building the Panama Canal, Panama gains independence from Colombia. The country is one of the most bio diverse countries in the world. This makes sense since it is in the equatorial region, close to the Amazon basin and has mountainous regions. With the diverse geology and warm, wet weather, Colombia is home to a wide range of flora and fauna and beautiful landscapes. In many ways, Colombia has developed a poor reputation due to its involvement in the drug trade. It has made peace with militant groups in the country and it has stabilized its economy. It is affected by the unrest and economic challenges in Venezuela but it has maintained a relatively calm society.

Colombian banknotes have existed since its earliest days of independence, but before 1900 the history is too complex to review here. But around 1904, some of the more traditional banknotes are put into circulation. Printed by Waterlow & Sons, they were well designed and contained large portraits of leaders including Simon Bolivar. The banknotes have a lot of ink; almost too much, but the engravings of ships and building on the reverse of each in this series are very nice.

Like many South American countries, American Banknote (ABN) printed many of the notes in the 1900s. This includes the series of ‘Peso Oro’ printing in the 1930’s and 40’s when Colombia went on the gold standard. The 1946 1 Peso (P-380e) shows the influence of ABN and the introduction of a gold background color to show that these are ‘gold pesos’. Throughout the 50’s – 80’s Colombia’s banknotes looked a lot like other countries in the region. There are some good examples. In 1986, Colombia issued a 5,000 Peso (still with the name ‘Peso Oro’) P-434a to commemorate 100 years since its constitution was ratified. Bundesdrukeri is the printer of the banknote. This note does a great job highlighting the constitution and early leadership. It also has unique line designs including what look like drawings of local birds on the front side.

The Bank of Mexico printed a commemorative for Colombia in 1992. It marks 500 years since the voyage of Christopher Columbus. This is a banknote that has many interesting components. The 10,000 peso (P-437a) shows an indigenous woman on the front. On the reverse is a set of images of tropical birds and a navigational map.

In 2014, the Bank put into circulation a new series of banknotes which are from the national printer. This series is striking in the portraits and the use of a head-to-toe accompanying image of the person in the facial portrait. For example, the portraits show people smiling or in action and not just sitting stoically for a portrait. The 20,000 peso (P-461) shows Alfonso Lopez Michelsen (President from 1974 – 1978) with high mouth agape as if he is giving a speech. As a result, the colors are attractive and the images used represent local culture, plants and landscapes. The higher denomination notes (20,000, 50,000 and 100,000 peso) are really nice designs, contain high security features and use a wide range of colors in beautiful ways.