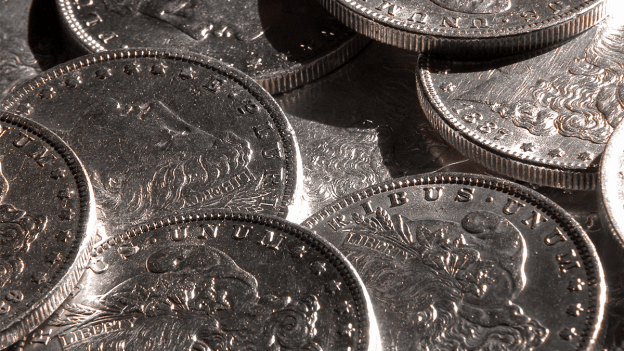 Many people in the US began collecting coins with Morgan Dollars or Peace Dollars. There remains significant interest in these coins and there are advertisements for them are in many magazines and TV infomercials. The US Mint has announced that they will be issuing commemorative Morgan and Peace Dollars in 2021.

Origin of the Morgan Dollar

The craze for Morgan dollars goes back to their origin. The Coinage Act of 1873 requires only a single design silver dollar to circulate. The “Morgan” dollars design is the product of US Mint engraver George T. Morgan and were first issued in 1878. The design shows Lady Liberty on the front and a majestic eagle on the back. The initial issuing of Morgan dollars continued until 1904. But there was still a lot of interest from both collectors and silver mining companies. The Pittman Act led to some of the original MD coins to be melted and re-struck as 1921 versions.

In the 1960s, a large stash of UNC coins is discovered in the Treasury (how is this possible??). Speculators acquired these coins and hoarded them. At the time, you could exchange a silver certificate for a silver dollar. We are still seeing UNC coins from this inventory up for sale. In the 1970’s the mint issued some coins that are called Carson City Morgans.

Some collectors did not like the design of the Morgan Dollar, or at least they preferred a less aggressive design. Coming out of World War I, the Mint replaced the Morgan Dollar with the Peace Dollar. The wing spread eagle is replaced with a passive eagle design perched on an olive branch. The eagle appears to be watching guard. The word PEACE is under the eagle. These coins date from 1921 to 1928 and then again in 1934 and 1935. The Denver mint struck over 300,000 Peace dollars in the 1960s. Strangely enough, these Denver peace dollars do not circulate. Maybe they are in a vault somewhere?

2021 is the 100th anniversary of the minting of both the Peace and Morgan Dollars. David Ryder, Director of the US Mint has announced that these coins “containing no less than 90% silver” will be minted in 2021. The design or issue date is not clear but, it is likely to be no earlier than the summer.