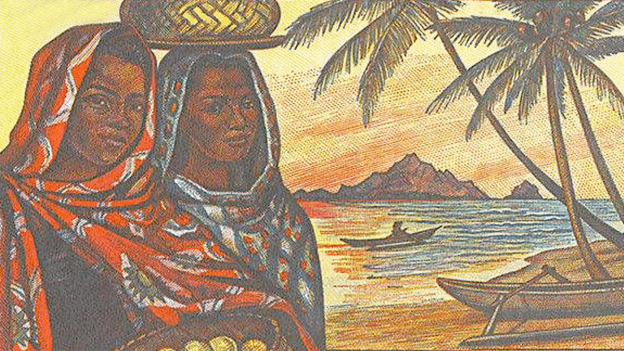 There are a number of countries that few people know exist. Comoros is one of them. Just north of Madagascar, but not all the way to the Seychelles (another country few people know about), there exists several islands that comprise the Union of the Comoros. There are about a million people living in this former French colony. It is one of the most southernmost Muslim countries. There is a disputed island called Mayotte nearby which is officially part of France and is the furthest away part of the Eurozone. It is also one of the poorest countries in the world and has suffered through repeated political unrest for most of its history.

Prior to gaining independence in 1975, the official currency was the overseas French Franc. Even after independence Comoros has maintained a strong financial and military link to France. The currency is printed by Bank de France and is also pegged to the Euro. Its first banknotes look very similar to the prior overseas French francs. The 1976 Comoros 5,000 Franc (P-9a) is colorful and shows local people, including a woman, a mosque and local fruits and fish. It looks like a nice piece of art. Comoros issued a new series in 1986 but the designs remained virtually the same. It was not until 2005 that a significant redesign was issued.

The 2005 series is strikingly different. It has a look closer to the Netherlands than the prior versions. The designs contain rectangular areas and have a more ‘blockish’ layout. The Comoros 1,000 Franc (P-16) shows this type of design. There is strong focus on fish and fishing including a fisherman in a small local boat. There are also multiple layers of print to create a strong security design. The 5,000 Franc (P-18) is another interesting example. The colors are a mixture of rose and orange. Fish, sea shells and beach scenes are shown. A portrait of Said Mohammed Djohar is prominently on the front side. It also contains an unusual image of a leaf-less tree. Strange but artistically beautiful.