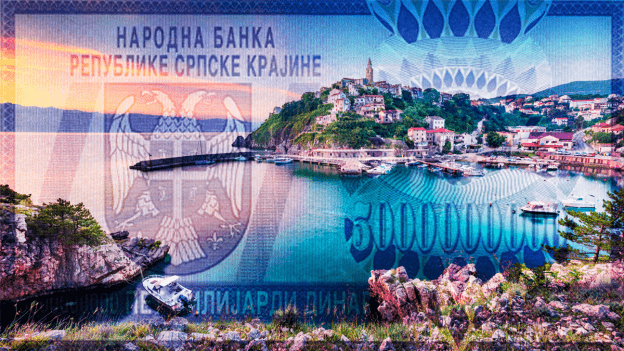 Croatia is a small country that emerged after the dissolution of Yugoslavia and the subsequent 1990’s wars. The country is known in Western Europe for its amazing beaches, walking trails through low mountains, extremely good sports teams and athletes. While its recent history is relatively short, its history as a people and culture go back at least 1500 years. Its location in south central Europe put it in between the Ottoman and the Austro-Hungarian empires. From the middle ages until WWI, it fell under Austrian influence and was combined in many ways with its neighboring regions – Bosnia and Serbia.

After WWI, Yugoslavia was knitted together and in Croatia, both Yugoslavia Dinar and Croatia Kuna co-circulated through WWII. Kuna is the name of their currency. This word means ‘marten’ in Croatian, and a marten is a small animal that had been trapped for its fur. For many years, marten pelts were a de facto currency in the area. The banknotes were printed by private German printer – Giesecke & Devrient. They look similar to Yugoslavia and other eastern European notes. The 1941 1,000 Kuna (P-4) consists of drag colors and a portrait of a sad looking person. Croatia was occupied by the Axis powers and led by a puppet government. Banknotes were then printed in Belgrade but remained somewhat dark and dingy.

The Kuna disappeared after WWII as it was a key part of Tito’s Yugoslavia. First, Croatia issued dinars in 1991. These were called the “Ruder Boskovic series” for the famous Croatian on the notes. These series are interesting because of the intricate line work and the very large cathedral on the reverse. They were printed in Sweden and were much more modern-looking than the Yugoslavia dinara that co-circulated through 1994. The country experienced war during these years which was accompanied by extreme inflation. There were even 100 million dinara notes (P-R15) issued during the time. In 1994, the dinara did become more colorful. The 1,000 dinara (P-R30) has an impressive image of a citadel on a hillside surrounded by wavy security line designs.

Evolution of their Banknotes

The 1995 10 Kuna was the completion of the transition to the Kuna across all of the regions of Croatia. For example, this note looks a lot like the German mark of the time. Famous people were shown on the front and large important buildings are shown on the reverse. The 10 Kuna (P-36a) shows Bishop Juraj Dobrila on the front and the Pula Arena (which looks like The Coliseum) and Motovun town layout.  The 100 Kuna was printed by OeBS. Some might have assumed this because it has a liberal use of the color orange- which seems to be fixture in Austrian banknotes of the time.

Croatia has begun the process of joining the Eurozone as a result the kuna will eventually be replaced by the Euro. This is probably why the banknotes have not undergone a significant re-design for more than 10 years. The Bank has issued a couple commemoratives, but all of its notes still look like 1990’s European banknotes.