D-Day and the Impact of WWII on the Banknote Industry 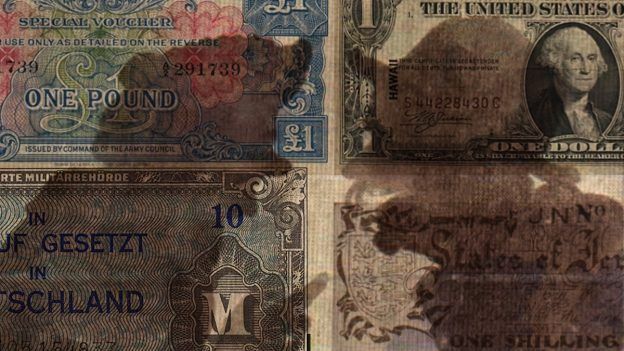 Each year, we commemorate the Second World War. September 1st- the beginning, December 7th- when the entire world became involved and June 6-when the tide turned, with several dates in May and August when hostilities ended. We have just passed June 6, the 76th anniversary of the assault on Normandy, and it is a good time to reflect on the impact of WWII Banknotes, printing and coins.

Many people are unaware that during the war, copper was in significant demand. As a result, many coins that used copper or copper alloys changed to iron steel. Many people are also not aware that many coins actually were changed to include more silver during this time. Many higher value coins at the time had around 40% silver with the rest mostly copper and nickel. Some coins including Fiji coins increased to up to 80% silver. Coin collectors can feel and hear the difference between these wartime coins.

The impact of WWII on Banknotes and their printing was more extensive. Changing occupations of different countries led several series of ‘Occupation notes’ and ‘military currency’ in some countries and colonies. Wartime occupation had a huge impact on the modern banknote industry. Prior to the war, many central banks made their own inks and printed their own notes. During the war, many European central banks facilities were damaged or completely destroyed. SICPA, KBA, Geiseke & Devrient, American Banknote and Thomas De La Rue emerged as the leading commercial companies and the international network of suppliers were established. The other significant change was the dramatic increase in the security features required to protect from counterfeiting by governments and organized crime. There is the famous Operation Bernhard where the German’s counterfeited English banknotes. It is also believed that the US made Japanese counterfeits with the idea to affect their economy. Countries had to react. Metal or metallized security threads were added to most banknote substrates. Printing on both sides of the banknotes and watermarks became expected. More complex designs and more use of raised intaglio ink also became standard.

It would be many years until wartime occupation banknotes included machine readable features, holograms and anti-copy features. But the upgrades in security were significant for the time.