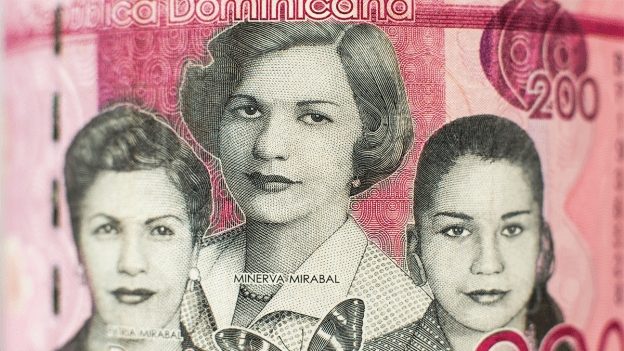 The Dominican Republic (D.R.) is a country that many people like to visit but even more call home. For example, people love to go to Punta Cana for vacation. We hear more about its neighbor Haiti than about the D.R., but the Dominican Republic is an interesting nation with a long history of banknotes.

Brief History of the Dominican Republic

The Dominican Republic shares the island of Hispaniola with Haiti. While Haiti had been a French colony, The D.R. had more Spanish influence. Columbus landed on the island in 1492 which began the Spanish influence. Over the years, the D.R. was involved in warring efforts between France, Spain and England. On 2 occasions, the US sent the Marines to the island to support local governments and expel foreign agitators. In fact, the US had an opportunity to buy the Dominican Republic in the 1800s for $1.5M but the US Senate did not ratify the treaty. Instead, the D.R. has experienced several regime changes, internal and external strife and at times authoritarian rule. Today, the D.R. has a relatively stable representative democracy.

Introduction of the Peso

The Dominican Republic declared independence from Spain in 1821 and had its own currency at the time. Its current government structure goes back to 1965 and the end a civil war. The Central Bank issued banknotes called ‘Peso Oro’. The 1964 1 Peso (P-99) looks like US money but has a portrait of Juan Pablo Duarte who was a leader during the War of Independence in the 1840 – 1850s. The reverse has a lot of beautiful rosette / guilloche design and a country emblem. The 5 (P-100) is similarly designed but used red ink and uses a portrait of Francisco del Rosario Sanchez, another early leader. The 10 (P-101) has a portrait of the third ‘founding father’- Ramon Matais Mella.

In 2002, the Central Bank issued a 100 Peso commemorative (P-175) for the 55th anniversary of the establishment of the Central Bank. This note shows all three of the founding fathers. 15 years after, they issued another commemorative 500 Peso (P-196). This is a lovely note. The colors are accented by flowers and many concentric circle designs. These designs match the security thread and optically variable ink features. The reverse shows the Central Bank Building. The 2014 200 Peso (P-191) is unique. It shows three women on the front. These are 3 of the 4 Mirabal sisters who fought against the dictatorship of Rafael Truillo. The three sisters were assassinated in 1960 and are martyrs in the Dominican Republic.  The reverse shows the monument to their sacrifice.