East Caribbean States – If You Want to Go Far, Go Together 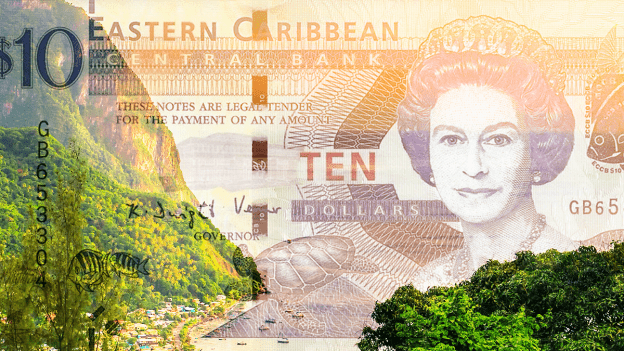 Eight island nations and 2 overseas territories decided in 1965 that their economic fortune was better protected through collaboration instead of competition. The decided to ‘go together’ and formed part of the motto of the Bank of the East Caribbean States, “If you want to go far, do together”.

Organization of the East Caribbean States

Six members of the Organization of East Caribbean States (OECS) are independent nations and use the East Caribbean Dollar- Antigua and Barbuda, Dominica, Grenada, Saint Kitts and Nevis, Saint Lucia and Saint Vincent and the Grenadines. Two addition island British Overseas Territories (Anguilla and Montserrat) use the EC Dollars. There are two additional islands that are part of the OECS but do not use the EC Dollars. Martinique is part of France so it uses the Euro, and the British Virgin Islands uses the US Dollar. All together, these 10 governments have decided to bind together economically to increase their overall strength. This is sensible. Together, they have less than 1 million inhabitants.

Queen Elizabeth II appears on all of their banknotes as she is the official Head of State or is recognized as the Head of the Commonwealth. So unlike many former British colonies that have removed the monarch from their currency, the EC nations maintain that strong and visible link to England.

The East Caribbean Dollar replaced the British East Indies dollar. It has existed since 1965, but the Central Bank was only formed in 1983. It has been pegged to the US Dollar at $EC 2.70 to $1 USD since 1976.  The economic union has been seen as a general success.

The Bank has issued 4 series- 1965, 2008, 2012, and 2019. There was also an interim upgrade in 2015. The EC shares a design challenge experienced at the Euro. How do you have a design concept that respects the independent identity of each nation? The first series had a simple design where QEII is shown on the front and a generic island beach scene covers the back. Each denomination has a different color scheme.

The 2008 series includes and older and happier Queen Elizabeth II, a flora and fauna theme and images from across the member nations. The $EC 10 (P-48) seems the best overall design. It is a light blue color with lines and spots of other tropical colors.  All of the notes include a map of the East Caribbean. The reverse of the $EC 10 has the Admiralty Bay in St. Vincent & the Grenadines on the left half and the Warspite Schooner in Anguilla on the right half. With the map of the East Caribbean States in the center, this design concept seems perfectly balanced. The 2012 and 2015 upgrades maintained the same general themes and images.

The 2019 series represents a significant change, and a dramatic design change. All denominations maintained the same images and even the same QEII portrait, but this series was printed on polymer and in the portrait orientation. The entire series has similarities to the newest Canadian and Australian series where there is a large window containing a holographic stripe. Again, the $EC 10 seems the best of the series, although the bright colors and use of the window makes the entire series striking and highly collectable.