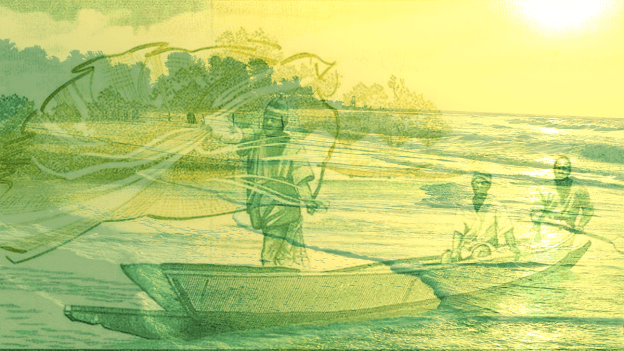 Gambia is a small nation on the western coast of northern Africa. It is actually the smallest nation in Africa and is nearly completely surrounded by Senegal. The Portuguese developed the area as an outpost used for the slave trade. As Portugal weaken in the 1800s, the British and French competed for the area and eventually created British Gambia. Slavery was not abolished in this British colony until 1906. Like many colonies in Africa, the local people pushed for independence after WWII. In 1965, the Nation of Gambia came to fruition and became part of the British Commonwealth of Nations.

The First Series of Gambia Currency

While Queen Elizabeth II did not appear on Gambia banknotes, she appeared on stamps. The first banknotes were issued by the Gambia Currency Board. They are based on British pre-decimal denomination convention. There were shilling and pound notes. The economy at the time was based primarily on agriculture and fishing. These aspects are on the banknotes. The first banknote was the 10 Shilling (P-1) showing a fishing boat on the front and a planting field on the reverse. De La Rue is the printer, which is obvious when you look at the multicolor printed check pattern. The 1, 5 and 10 pound note issued in this first series follow the same design concept, just with different designs on the back.

Around 1970, many countries including Gambia decimalized their currency. Gambia adopted the Dalasi as their currency. This name comes from the slang term for the West African 5 French franc. The banknotes maintained the same agricultural theme but have the effigy of the first president – Dawda Jawara. A new 1 Dalasi was issued in 1978 (P-8) to commemorate the opening of the Central Bank. The note changed only in the design on the back. It now shows the central bank building. In 1987 a new series began to circulate but, with little significant changes in design. The artwork and especially security lines were made more intricate but the front remained the same with images of a fishing boat and President Jawara.

Evolution of the Design

In 1991, the designs began a transition from agriculture to birds with the 5 Dalasi (P-12). A kingfisher is on the front of this note. In 1994, President Jawara was deposed. As a result the banknotes were changed to replace Jawara’s portrait with the portrait of a Gambian woman on the 5, 10 and 50 dalasi, and a two different men on the 25 and 100 respectively.

The 2006 and 2015 series continued to show local birds on the front and culturally re;levant buildings, images and landscapes on the back. For collectors who  focus on birds, these are great notes to search for. 2019 represents the completion of the transition to new designs focused on a Bird theme. The 2019 5 Dalasi (P-37) continues to have the kingfisher on the front and cattle on the back, but the colors are now a vivid and saturated red. The 200 (P-42) has an interesting orange color. With a bird in darker colors so it looks like they jump off the banknote.

The Gambian notes are very nice and colorful examples of modern design.