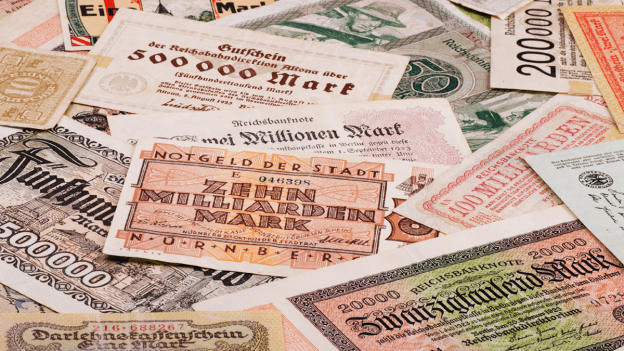 As Germany contended with extreme shortages of metals during World War I, small denomination banknotes were issued. And when the currency devalued and the government could not meet demand, German towns and companies began issuing their own notes to facilitate buying and selling. More than 600 cities got involved which led to creating and competition to create interesting notes and express the local spirit and sentiment. As a result, these ‘notgeld’ or emergency notes became collectable and spawned an entire industry of collectable banknotes and novelty notes.

The first type of notgeld was called “verkehrsausgaben” which was issued for the primary purpose of commerce when coins were not available. These notes typically were 10, 25 and 50 pfennig (100 pfennig = 1 mark) and were basic pieces of script with little imagery of detail. Later in the war the value increased and the designs became more intricate, but their purpose was still primary to be used in circulation.

After the war, many people collected the verkehrsausgaben, especially the more colorful and interesting examples. Post-war entrepreneurs capitalized on this and started creating series of notgeld. These are “serienscheine” or serial notes or serial certificates. They are for the primary purpose of collecting. Series became larger and more artistic. Like all collector markets, the creators of these serienscheine began creating products based on popular themes like dogs and cats and beers.

One of the most interesting type of Notgeld is the “kapselgeld” it translates to encapsulated money. These tokens were typically pieces of metal or clay or porcelain with a stamp or something else portending value. Similar items are in use during the US Revolutionary War. It is always fascinating to see the creativity of the human spirit.