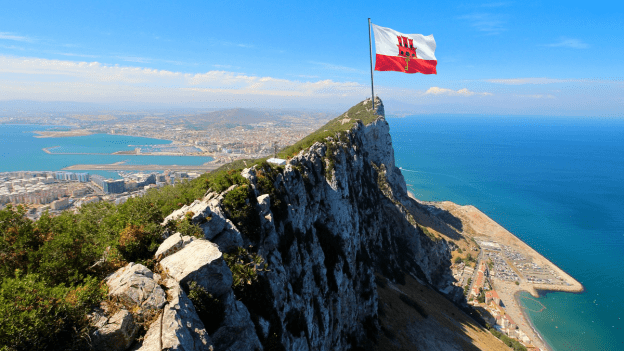 The geographic importance of Gibraltar is obvious when looking at a map. The Straits of Gibraltar is the connection between the Mediterranean Sea and the Atlantic Ocean and is only about 10 miles across. From a military perspective, this area has been key stronghold controlling naval traffic in the area. This small area was ceded to Great Britain in perpetuity at the Treaty of Ultrecht in 1713. It is home to only 32,000 people and remains an Overseas British Territory.  With such a small population, one can imagine that they don’t introduce banknotes too often.

In 1934, the Currency Notes Act enabled Gibraltar to print its own banknotes. These notes have been denominated in pounds sterling, but are only legal tender in Gibraltar. The 10 shilling (P-14) is a classic banknote. It has a portrait of the Rock of Gibraltar. Also there is a lot of beautiful and intricate security print lines in blue on a yellow background. The reverse is all in blue with a castle in the middle of scrollwork. The 1 Pound (P-18) has a similar design but is green over yellow. The Rock of Gibraltar is noticable on this note also, but in a different location. The 5 pound (P-19) is nearly indistinguishable from the 1 pound note.

In 1975, the bank issued a new series of notes containing the portrait of young Queen Elizabeth II. For example, the 1 pound (P-20) is a lovely note printed in oranges and reds with the Queen on the front and a Gibraltar brick building on the back. The 50 Pound (P-24) is notable also. The reverse has a complete ariel view of Gibraltar. The Queen’s portrait is set off on a background of pinks and blue lines that give it a three dimensional quality.

Several commemorative notes are also in circulation. The 2000 5 pound (P-29), 2004 Tercententary commemorative 20 pound note (P-31), and a 2018 Replica of the 1934 10 Shilling note. More recently, the country has experimented with a more modern approach to the portrait of the Queen. And in 2015, Gibraltar issued a polymer 100 Pound note (P-40). This note has a large window and accurate replica of a Queen portrait in the holographic foil.