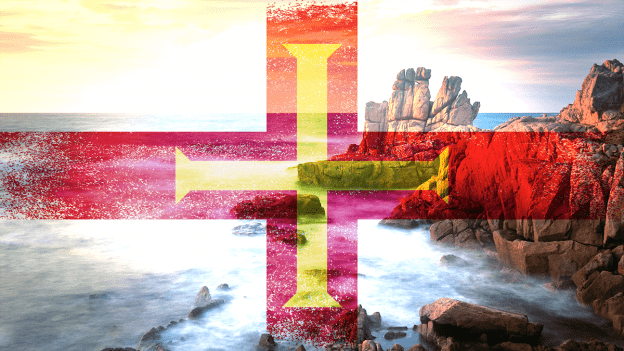 Guernsey is strategically placed in the Channel between England and France. For hundreds of years, France and England have fought each other, and there is little Guernsey between the two. But somehow Guernsey maintained its non-alliance position for a thousand years and only in the last 100 years became more formally aligned to the United Kingdom.

While Guernsey is a separate country, its currency is the UK pound with the Guernsey pound being a ‘local issue’ version. What does that mean? It means, it has the same value as a UK pound, can be directly converted to UK pounds, can be used for commerce in the rest of the UK- theoretically. Just like Scottish pounds and North Ireland pounds, it is a UK pound, but is considered an ‘alien’ banknote in England and is repatriated when circulated back to a bank in England. For those it the UK, it would be the same as if Puerto Rico had its own dollars.

Guernsey is fun to talk about. It is one of the rare times, you can use the work bailiwick and not look like an old person. Guernsey is officially the Bailiwick of Guernsey.  This has something to do with the jurisdictional management of the country.

Guernsey aligned itself more and more with the UK over the last few centuries. This relationship became even closer in 1921 when the two countries entered into a currency union. All the Bank of Guernsey did was overprint their local currency with the words British. The first Guersey pound (P-13) issued in 1921 is very attractive and looked a little like Scottish notes of the time. The designs of the 10 shilling and 1 pound sterling remained basically unchanged through WWII.

Guernsey was occupied by Germany throughout WWII. Guernsey issued strange denominations throughout the war. There were the 6 pence, 1 shilling 3 pence, 2 shillings 6 pence and 5 shillings banknotes. I am guessing these denominations matched some Reichsmark value. After WWII and beginning in 1945 through 1966, the designs reverted to its pre-war look, but the bank added a 5 Pound note (P44). Printed by Perkins & Bacon, there was added color and a multi-color checked pattern that became a hallmark of DLR banknotes.

Banknote Designs Over The Years

In 1969, as decimalization was being implemented across the UK, Guernsey introduced a new series with new designs. The new 5 pound note (P-46) from this series is well known in collector world. It is purple with a detailed waterfront image on the reverse. The bank added a 10 pound note in 1975 (P-47). This note also has a detailed image of a waterfront with a small portrait imposed over the upper right corner of the banknote. The front of this note is unlike any other note. It has Lady Britannia hugging the Guernsey Coat of Arms with vines emanating from the coat of arms. In the middle of this, there are images and text related to the country.

The 1980 Series has a front design similar to the 1945 series but a reverse that follows the 1970 approach. All of the notes seem like they are an old-fashion English design you might expect to see in an 1800’s English text. Given the small population, these notes were used for many years. In 1990, a similar series was issued, but all of the banknotes were made a little smaller.

The 1994 Series lost a 1 Pound note; it turned into a coin. The entire series now showed Queen Elizabeth II on the front. All of the notes have an intaglio-printed portrait of Queen Elizabeth on the front, which is pink or blue in color. The reverse of each note shows a seaside landscape. The Bank has issued a couple commemoratives in the last 20 years but has left the remaining designs untouched.

The entire Guernsey series reminds me of a subtle British fragrance. The notes have gentle colors, interesting local flair and support and older woman. I love these old fashion notes.