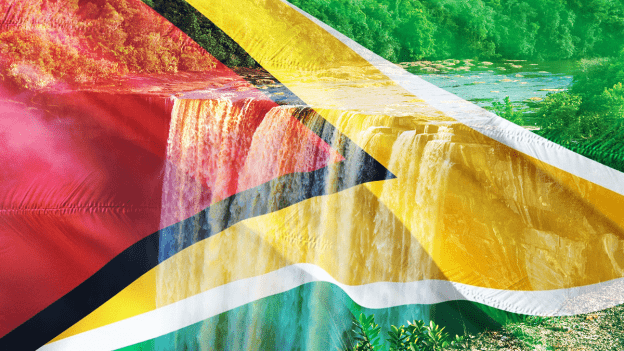 Guyana is a South American country neighboring Brazil, Venezuela and Suriname. The name Guyana comes from the Indigenous tribes who were there before Europeans arrived and it means land of water. It has British and Dutch influence. It was first settled by the Dutch in the 17th century. Due to conflicts with the Netherlands, it eventually fell under control of the British and was called British Guiana. During the transition of power from the Dutch to the British the Guyanese Dollar arose. The country eventually gained independence from Britain in 1966.

Although Guyanese banknote may not stand out that much to the average collector, they do hold their cultural significance. The Guyana 1 Dollar, 1938 sets the tone for many Guyanese banknotes to come. Its printed by Waterlow and Sons. It features a waterfall on the front as well as a Toucan and a ship on the lower right-hand corner. The reverse of the banknote features a portrait of King George VI. The entire banknote has a US dollar look.

In the 60’s the design was revamped and since then it hasn’t changed too much. The Guyana 1 Dollar, 1966 looks very similar to the banknotes in use today. It features the Guyanese coat of arms, Kaieteur Falls and on the reverse an image of one of the nation’s many industries. It looks very similar to the current Guyana 20 Dollars, 2016. Another notable banknote that was released in 2016 is the 50 Dollars which commemorates 50 years of independence. It features the coat of arms in the center as well as a special script with a jaguar head on the right hand side which reads “Celebrating 50 Years of Guyana’s Independence” as well as a map of Guyana. The reverse features an image of the Guyanese flag and outline of the country with doves and flowers to emphasize Guyana’s independence. Do you think its time for Guyana to refresh their banknote design? What would you like to see on their banknotes?