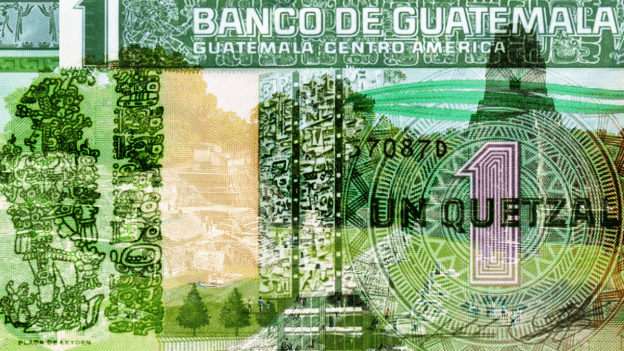 In continuation of our previous 2 Hispanic Heritage blogs, we investigate currency used in Guatemala which declared its independence from Spain in September 1821 along with many other Central American countries. Like many other countries that declared independence in 1821, Guatemala experienced continued unrest for many years. On March 21, 1847 it declared itself a fully independent republic with Rafael Carrera as its first president. The country has had a tumultuous history since then.

The first real paper banknotes appeared in 1881. From the very beginning Guatemala banknotes were very attractive and used color liberally. They also used detailed portraits and vignettes. An amazing example is the 1882 1 Peso. It has a 2 portraits of women, used at least 4 colors and also has a complex design of flowers, and leaves on the reverse.

Guatemala began using polymer material for its lower denominations while co-circulating with higher denomination paper banknotes. For example, one note that stands out is the 2012 1 Quetzal (P-115c). I like this note because it shows a portrait in the opacifying layer in the window. It is a nice effect. Other than that, the more recent banknotes are unremarkable in design or security features.