“I Want to be Alone” with the Greta Garbo Banknote 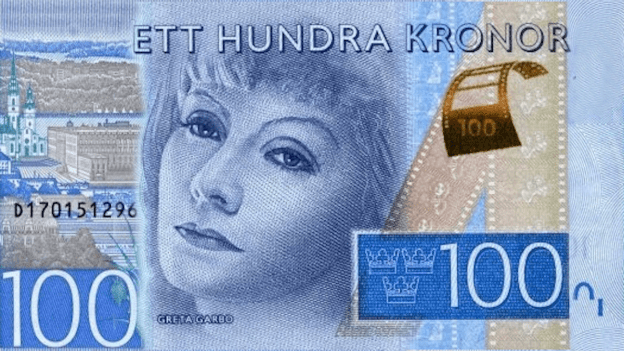 Greta Garbo was born in Stockholm, Sweden and is considered one of the greatest actresses of her time. She was famous during the silent era and in early talking pictures as a leading lady and sex symbol. She only made 27 movies as her accent made it difficult for Americans to understand her in the early talking movies. A famous line attributed to her is ‘I want to be alone’ due to the invasion of her privacy by gossip columnists. Still, Garbo is remembered as a great actress both in America and in her home country. She is so beloved that in 2016 Sweden designed and issued a 100 Kronor ‘Garbo” banknote. It is one of the most gorgeous banknotes issued in the last 20 years.

A Look Into The Greta Garbo Banknote

Let’s start with the most obvious feature, the portrait of Greta Garbo. The engraving captures Ms. Garbo’s alluring beauty. The portrait still looks like a banknote portrait while also highlighting her eyes, nose, mouth, and extremely long eyebrows. The front use film rolls with embedded imges to strengthen the movie theme. A rolling bar color shift ink is used in an overt film roll security feature. There is a windowed thread that uses micro-optics shifting images from KR to a crown. The images are not very clear but the movement accentuates the ‘film-look’ of the banknote.

The reverse images and watermark are also extremely well done. Great Garbo’s portrait is replicated well in the watermark. The reverse image is a detailed landscape of Stockholm. There is also a an outline of the country of Sweden and each of its regions. The integration of text, color blocks and numbers on the back just seem to work perfectly. Also a cool inclusion in the banknote is the name of all of Garbo’s film roles in microtext on the front. It is a nice touch.

Maybe blue is a great color for a banknote. Maybe the use of a woman’s portrait on a banknote is a good choice. Or maybe Crane just designs and prints amazing banknotes. Whatever it is, this note is a winner.