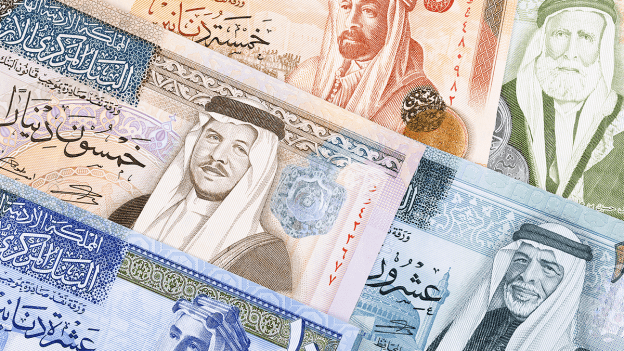 Jordan is a Middle Eastern country worthy of a visit if you ever have the chance. It is a very safe country neighboring Syria, Israel and Saudi Arabia. It is home to historical sites like the ancient city of Petra and also the dead sea. The country was part of the Ottoman empire and then a British mandate. While a British mandate they used the Palestinian pound as their official currency. They eventually gained independence from the British in 1946 but, continued to use the Palestinian Pound for a few years. The Palestinian banknotes of the time were written in English, Arabic and Hebrew due to the various influence in the region. The design incorporates images of historical sites like the White Mosque of Ramla on the front left hand corner. The reverse features an image of the Tower of David as well as trilingual text stating the denomination.

The very first Jordan Dinar featured image of Jordanian royalty. it features King Abdullah of Jordan on the right hand corner and on the back is an image of the Petra historical site. The text on the back resembles that as on USD. This classical design of banknotes remained relatively the same throughout the years. The 20 Dinars, 1975 features King Hussein on the front left hand corner and on the reverse is an image of the Hussein thermal power station. This design remained the same up until the 90’s when they got minor touches like updated portraits of the King on them.

Modern Jordan banknotes have had updates to security features, more intricate designs and also brighter colors. However they maintain the same theme on them with images of Royalty and historical sites and other such monuments. The 10 Dinars, 2013 features an image of King Talal of Jordan as well as very vibrant shades of blue. The reverse side of the banknote features an image of the first parliament building of Jordan.