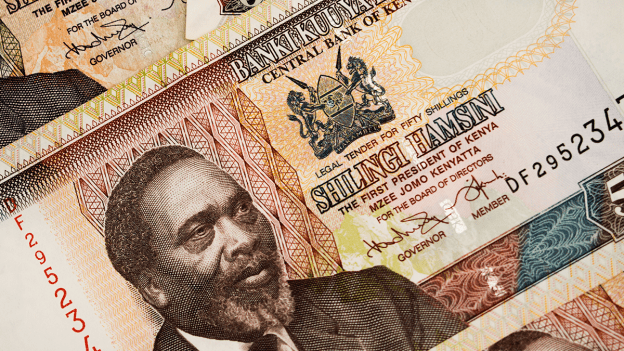 Kenya is located in East Africa. It has a very beautiful landscape and is very popular among tourists because its a safe and friendly country. Some people may know the country because of its mention in the famous movie “Out of Africa” which stars Meryl Streep. The country was a former British colony up until 1963. Before then it was known as British East Africa. In 1966 upon their new found independence they started printing their own currency which came to be known as the Kenyan Shilling. The first banknotes had a very uniform design among them. For example the Kenya 10 Shillings, 1966 is colored in green and features an image of Jomo Kenyatta who served as Kenya’s first president since independence. Also there is an image of the coat of arms in the center. The reverse features an image of people harvesting crops.

The First Banknotes of Kenya

This same design carried on into the mid 1980’s when newly designed banknotes featuring former president Daniel arap Moi. He served as Kenya’s second president. The Kenya 10 Shillings, 1993, alongside an image of the president is also the Kenyan coat of arms and on the back is an image of a university as well as an image of a mountain. This design continued up until the early 200’s when images of Jomo Kenyatta began to be printed on banknotes again as homage to the former leader.

In 2019 a brand new revamped series of banknotes was put into circulation. This was a major step up from the old, dated design. The new designs are bright and the design is ravishing. For example the Kenya 100 Shillings, 2019 is colored in purple and features a statue of Jomo Kenyatta as well as the convention center and the Kenyan coat of arms. As you may notice a lot of former elements are actually still implemented. The reverse features an image of livestock and corn.