Kuwait – From the Rupee to the Dinar 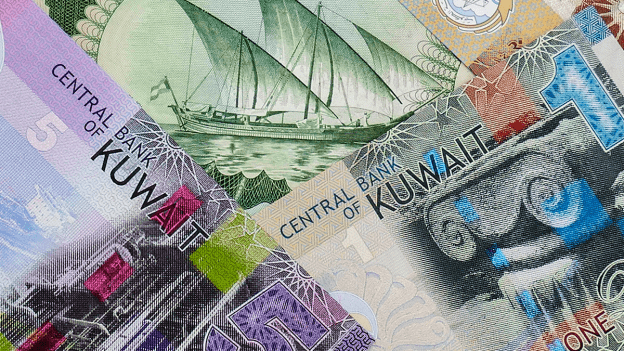 Kuwait is a small nation located in the Gulf region of the Middle East. The country is very wealthy due to its large oil reserves. It is also very popular tourist location. The currency that they use today is the Kuwaiti Dinar. It was first introduced in 1960 to replace the Gulf Rupee. The Gulf Rupee was issued by the Indian Government and used by countries like Kuwait, UAE, Qatar, Oman and Bahrain. Those countries eventually phased out the Rupee with their own local currencies. Kuwait chose the Dinar and their first banknotes began to circulate in 1961. The denominations ranged from 1/4 all the way to 10 Dinars.

The First Dinar of Kuwait

The first series of Dinar featured portraits of Sheikh Abdullah Salim Sabah on the front. Such as the 1/4 Dinar, 1961. The reverse features an image of the port of Kuwait. The second series of Dinar banknotes were released in 1968 and they follow the same design as the previous design however the 2nd series features an image of an older Sheikh Abdullah Salim Sabah with facial hair. The Kuwait 1 Dinar, 1968 features the Sheikh on the front and on the reverse is an image of an oil refinery. A third series was released in 1980 and it features the same design as previous one but, instead of featuring images of images of royalty, they feature an image of the Kuwaiti Coat of arms.

In 1994 the 5th series of Kuwaiti banknote were released in 1994 and they are what I would call the square series since the updated design had a lot of square shapes integrated into the design. They also featured images of national buildings, monuments and images of Kuwaiti culture. The 6th and most up to date series was released in 2014. This features ultra modern designs with the newest security features. They have bright colors and the designs are very captivating. They feature images of buildings and monuments as well as wildlife like falcons, and sea turtles.