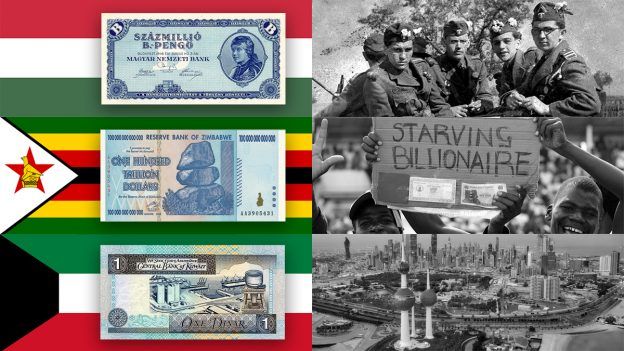 Some countries have heavily adapted their monetary policy, printing larger and smaller denomination banknotes in response to their needs. Large denomination bills are often printed to facilitate cash transactions in countries that are suffering from hyperinflation, while small denominations are characteristic of a stable and highly-valued currency.

If you’re a resident of the United States, you’re probably used to seeing banknotes in one of seven denominations – $1, $2, $5, $10, $20, $50, and $100. Although it has done differently in the past, the United States has stabilized its economy around monetary policy that allows for the printing of just seven different denominations of paper money in the same simple denominations.

The largest denomination banknotes ever were printed in Hungary in 1946, following the end of World War II. Predictably, the decision by monetary policymakers to print such gargantuan numbers onto bills came about as a response to concerns about hyperinflation – Hungary’s currency was virtually worthless at the time, and there was a need to print growing denominations of bills to facilitate cash transactions between citizens and maintain any movement of goods in the economy.At the height of the madness, Hungary was printing long-scale 100 million billion dollar, and short-scale 100-quintillion dollar notes.

Reportedly, notes with face values of up to 1 sextillion dollars were printed, but never entered circulation. Instead, a new currency called the forint was introduced, which could be exchanged with the devalued money at a rate of 400 octillion dollars for one!

When President Mugabe took control of the Zimbabwean government in the 1990s, the nation was in reasonable shape both economically and in terms of fiscal policy. Attempting to repatriate Zimbabwe’s land and resources, Mugabe forcibly seized all foreign-owned assets, removing foreign manufacturers and agriculturalists from the country, and giving control of the lands and businesses to ancestral Zimbabweans.

What Mugabe failed to realize was that the people he expelled possessed know-how that the country did not have – these businesses had been supporting the economy in a big way and now nobody knew how to run them. Massive unemployment and hyperinflation followed, and Zimbabwe was forced to print massive banknotes to try and keep up.

As recently as 2009, the Zimbabwean government was printing 100-trillion-dollar banknotes that were valued at just $5 USD – everyone in Zimbabwe was a trillionaire, except that a trillion dollars could barely buy a loaf of bread. Today, thanks to continued inflation, the Zimbabwean 100-trillion banknote is worth less than $0.40 USD.

Kuwait – The Smallest Denominations for the Most Expensive Currency

A country like Kuwait falls at the opposite end of the spectrum compared to our previous examples. Kuwait hasn’t experienced hyperinflation, a decimated economy, or tried to recover from war. It’s a rich little oil nation with a healthy currency called the dinar that’s currently valued at 1 Kuwaiti Dinar per $3.31 USD.

Kuwait’s healthy economy is in large part due to its small population and oil exports, making it one of the highest GDP-per capita states in the world. The Central Bank of Kuwait printed and released its most current set of banknotes in June 2014, including some of the lowest denominations we’ve seen. In addition to 1, 5, 10 and 20-dinar denominations, ¼ and ½ dinar banknotes are also available to help facilitate smaller transactions of lower-valued goods.

Countries print banknotes according to their needs, so it makes sense that all nations don’t follow the same one-size fits-all approach when it comes to determining what currency denominations to release. Countries often print high-denomination bills when their currency is devalued, and lower-denomination bills when their currency is highly valued.
While these measures help to facilitate cash transactions, they aren’t always sustainable solutions. Hyperinflation cannot be fixed by printing more money – it requires economic interventions, job creation, and sustained growth. Still, these high-denomination notes are great for collectors, both for the sense of novelty they provide and the stories they carry with them.