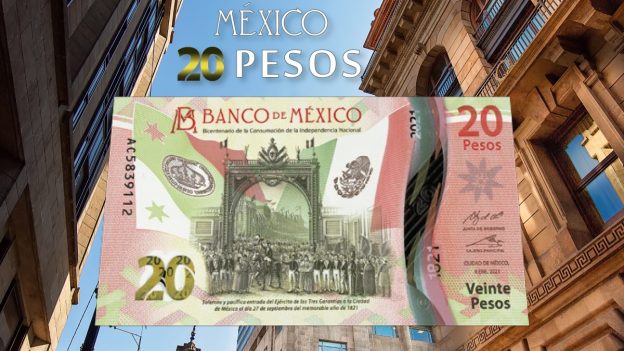 This past September 24, 2021 Banco De Mexico the Central Bank of Mexico made a press announcement and even live streamed an event where they announced that they will be introducing a newly redesigned 20 Pesos banknote on September 27, 2021. The new 20 Pesos commemorates 200 years since Mexico’s independence. Because of this, the note features a lot historical imagery that pertains to the Mexican independence movement. This is another gem of a banknote added to the newly designed 100, 200, 500 and 1000 Peso banknotes that make up the G series of banknotes that began to circulate in 2018.

The old 20 Pesos banknote is also made of polymer. The obverse side of the banknote features a portrait of former president Benito Juarez. There is also an image of a book and scales symbolizing the rule of of law. The reverse of the banknote features an image of the Monte Albán archeological site located in the state of Oaxaca. The portrait of Benito Juarez has since moved to the new 500 Pesos banknote. The new 500 Pesos shares the image of Juarez and even the same color scheme.

The new 20 Pesos is also a polymer note and comes in green, red and white; the same colors as the Mexican flag. The front features an image of the Army of 3 guarantees entering the gates of Mexico City on September 27, 1821 to consummate independence after 10 years of initial fighting against the Spanish Empire. The day afterwards, the declaration of independence is signed. In addition there is images of the old flag and the new one. The reverse side features images of Mexico’s diverse ecosystem. There is an image of a Mexican crocodile and also the Sian Ka’an Biosphere Reserve, in the state of Quintana Roo.