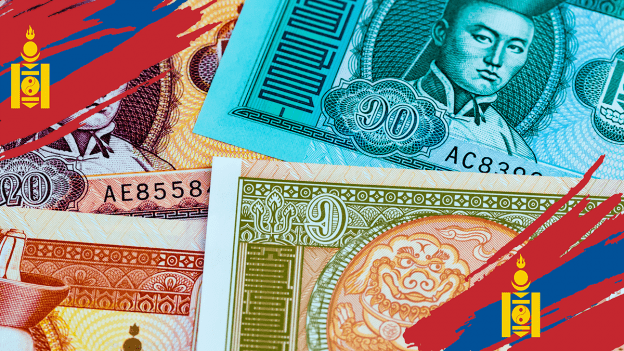 Mongolia is locked between Russia and China. While it is the largest landlocked nation in the world, Mongolia is the least populated with only about 3.3 million people. The country features rugged terrain with its highlands in the northern and western parts and its southern regions taken up by the Gobi Desert.

History Of Currency In Mongolia

The Mongolian Togrog or the tugrik has been the country’s medium of exchange since its introduction on December 9, 1925. The togrog is equivalent to one Soviet ruble and replaced the Mongolian Dollar and all other currencies in the country. In 1929, the togrog has become the only legal tender in Mongolia. Centered on the front side of the first banknotes is the national symbol of the country which is the Soyombo. The Soyombo is a depiction of a flame that represents success and prosperity, and three branches that symbolize the past, the present, and the future. The sun and a crescent moon that signify the sky are under the flame while the yin and yang symbol is at its center and balanced by the two bars standing on each side. The Soyombo symbol also reflects two inverted triangles that symbolize the defeat of its enemies.

The 1939 issues of the Mongolian togrog feature a portrait of commander in chief Sukhbaatar and the Soyombo symbol. However, the Soyombo was replaced by the Socialist emblem on the 1941 set of banknotes.

In 1993, the MongolBank introduced mongo denominated banknotes highlighting the Soyombo and sports such as archery, wrestling, and horse riding. However, these notes are rarely used in circulation but are in the interest of many banknote collectors.

Along with the series are banknotes that depict Damdini Sukhbaatar on the obverse of the Mongolia 5, 10, 20, 50, and 100 togrog denominations while larger denominations bear a portrait of the founder of the Mongol Empire, Chinggis Khan. Recent Mongolian tugrik banknotes share the same design elements and color schemes as banknotes from this series, only that they carry new dates, signatures, and enhanced security features.

In 2016, Mongolia also introduced a 20,000 tugrik to commemorate the 800th year of the Great Mongol State. This paper bill is the first in the world to ever use the Laser Originated Optical Key (LOOK) security feature.