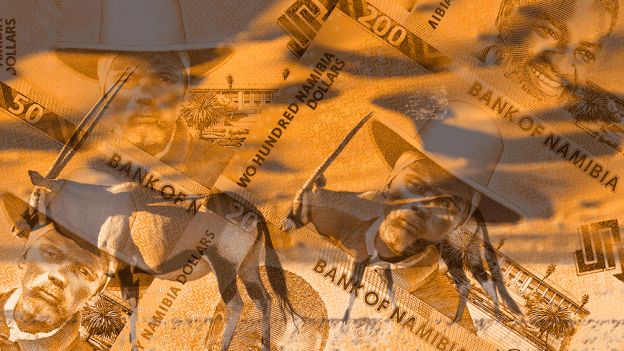 The Republic of Namibia is set near South Africa, Angola, Botswana, Zambia, and the Atlantic Ocean, between the Namib Desert and the Kalahari Desert. Though one of the driest countries on earth, Namibia boasts a vast array of wildlife and natural attractions such as the River Fish Canyon, the Namib Sand Sea, the Quiver Tree Forest, and the Etosha Pan. This southern African country is also also produces some of the finest diamonds in the world.

Despite having a  strong connection to its wealthy cultural heritage, Namibia still looks forward to the future. It has advanced infrastructures especially in the banking sector, such as mobile and online banking.

The country gained its freedom from South Africa on March 21, 1990. As a result, three years after, the Bank of Namibia was formed and introduced the Namibian dollar in lieu of the South African rand. The first set of banknotes issued by the Bank of Namibia bears the designs of Tumba Bruk. Their front side carried a portrait of Kaptein Hendrick Witbooi who was a national hero while the back design features antelopes.

The Bank of Namibia’s 2011 issues were the first banknotes to bear new security features by Oberthur Technologies. They include a Securicoat print, a color-changing Janus windowed security thread, and even a Diaphan registration device. Some of these notes display a portrait of Kaptein Hendrick Witbooi while the smaller denominations feature an OVI diamond and a picture of Sam Nujoma. He was the founding president of the Namibian Nation. As it was noticed that the diamond OVI design would break after multiple handlings, the diamond feature was removed from the design on the recent issues of the Namibian dollar notes.

In celebration of the 30th anniversary of independence, the Bank of Namibia introduced a 30 dollar note. For example it features a “3 Decades of Peace and Stability” theme. In addition, this is a polymer banknote. It also reflects pictures of the three presidents of the country, founding president Dr. Sam Nujoma, second president Hifikepunye Pohamba, and president Dr. Hage Geingob who is the current president of the nation.