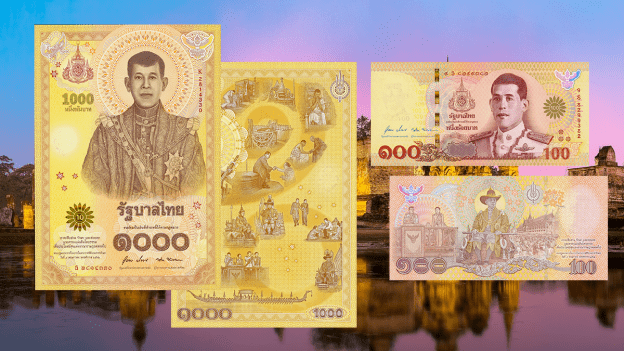 In 1987, the Bank of Thailand issued a 60 Baht commemorative (P-93a) is square in shape and about 6” x 6”.  It commemorated the 60th birthday of King Rama IX. It’s a beautiful note that shows the King on a throne. It is also likely the first use of optically variable ink in an issued banknote. The bank has issued commemorative banknotes for his accession to the throne, Queen Sirkit’s birthday, and the anniversary of their wedding.  The bank seems to issue at least one commemorative a year and often more.

In 2007, the Bank issued a page-size banknote to commemorate the King’s 80th birthday. This banknote is unique in that it appears to be an uncut sheet of a 1, 5 and 10 baht, but on the reverse is a single concept piece of art. It follows the life of King Rama IX from birth, through childhood and to his 80th year. Going through the fascinating chronology of his life, his family and several personal interests. It clear that this note belongs in a frame.

In 2020, Thailand issued 2 commemorative banknotes to celebrate the accession of King Rama X to the throne. In this case there is a 100 baht for circulation and a 1,000 baht for collection and framing. This note is about 5” x 7” and has a similar design concept on the reverse as the 2007 large commemorative. The images on the back show the path from his father’s passing to the ceremonial accession to the throne. It is intricate and beautifully designed.

There has been some news in the media that there is either missing security features on the 100 or 1,000 or the 1,000 looks too similar to a previous note causing some confusion. Digging deeper, this seems to be fake news propagated on Twitter and dispelled in local Thai media. The Bank of Thailand has always made high security and high quality banknotes with the latest security features. These new ones are no exception.