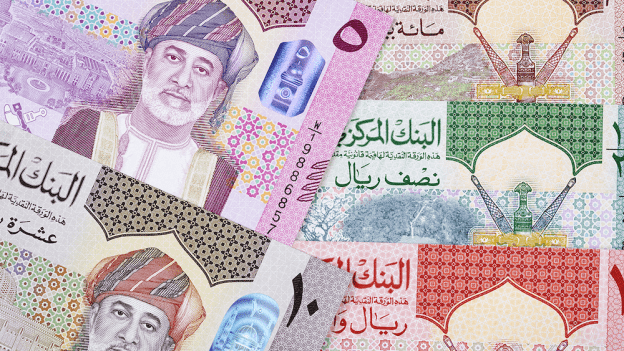 The Sultanate of Oman is the oldest independent state in the Arab world. It is located on the southeastern coast of the Arabian Peninsula. It also shares maritime borders with Iran and Pakistan. The Omani Sultanate was one of the most powerful empires from the late 17th century to the early 20th century. Its influence reached across the Strait of Hormuz to modern-day Iran and Pakistan, and Zanzibar to the south. As its power declined in the 20th century, the sultanate and the United Kingdom established and built a mutually beneficial relationship that lasted over 300 years. Muscat, Oman’s capital and largest city, is the principal trading port of the Persian Gulf region and one of the most important trading ports in the Indian Ocean.

The first family of banknotes issued by the Central Bank of Oman circulated from 1976 to 1985. The denominations in the family are 100 baisa, 200 baisa, quarter rial, half rial, 1 rial, 5 rials, 10 rials, 20 rials, and 50 rials. In addition most of these Omani notes were printed by Bradbury, Wilkinson & Company. Only the 200 baisa note was printed by De La Rue, so its Arabic font is slightly different. The notes all had solid security threads and watermarks of the coat of arms. They also featured different landmarks on the reverse side. The front designs featured the coat of arms of Oman—a sheathed khanjar (dagger) superimposed on two crossed swords. Only the 20 and 50 rial banknotes featured Sultan Qaboos bin Said instead of the coat of arms.

The second family of banknotes was circulated from 1985 to 1994. In addition these notes had a more uniform design—they all featured an updated portrait of Sultan Qaboos bin Said in front and different landmarks at the back. These notes are all printed by De La Rue.

In 1995, the Central Bank of Oman issued a new family of notes. The front designs all feature an updated portrait of Sultan bin Said and a landmark. Meanwhile, the back designs featured different cultural and architectural feats. The baisa and 1 rial notes were printed by Giesecke and Devrient while the remaining notes were printed by Banque de France. Five years later, the baisa and 1 rial notes were replaced by coins. The other notes were updated with a holographic stripes in front to deter counterfeiting.

A commemorative family of Omani notes were introduced on 18 November 2010, the 40th National Day, the day when the sultan overthrew his father, and 70th birthday of Sultan Qaboos bin Said. These notes have updated security features, including a crown registration device, a varifeye thread, a windowed security thread with demetalized text, and an electrotype watermark. These notes also bore the 40th National Day logo. In addition Giesecke and Devrient printed all of the commemorative notes.

Five years later, a commemorative 1 rial note begins to circulate to celebrate the 45th National Day. It was initially withdrawn because of an error in the Hijiri year—instead of 1437, the date appeared to be 1427 on the first printing. The purple rial note won the Special Achievement Award at the 2017 Security Currency Printing Conference in Azerbaijan. Its front side featured Sultan Qaboos bin Said, the Omani arms, and also the Al Alam Palace in Muscat. Its back design featured two desert white butterflies, the 45th National Day logo, and the Sultan Qaboos University in Al Khoudh. In addition the security features of the note included a khanjar registration device, a two-tone windowed security thread, and a watermark of the sultan. Giesecke and Devrient is the printer and it also measures 167 mm by 76 mm.

In 2019 the Central Bank of Oman demonetized early banknotes issued from 1976 to 1995. As a result a new family of Omani notes were introduced in 2020. This family is the first to not exclusively feature Sultan Qaboos bin Said. Instead, the notes also feature Sultan Haitham ibn Tariq ibn Taymur, who ascended the throne after Qaboos bin Said’s death.

The new green 50 rial note is the first note from the series. It was introduced in July 2020 and also commemorates the 50th anniversary of the rise of the Modern Omani Renaissance and its founder, Sultan Qaboos bin Said bin Taymur. The front side of the note features his portrait, as well as the Central Bank of Oman building, the Mirani Fort, and the coat of arms of Oman. The reverse side of the note features the facades of the Council of Oman, the Supreme Court, and also the Ministry of Finance.  Its security features include a green-to-gold SPARK of the denomination, a coat of arms registration device, a gold-to-blue varifeye ColourChange Patch, a green-to-gold RollingStone windowed security thread, and also a watermark of Sultan Qaboos bin Said and electrotype Arabic numbers. The note is 173 mm long and 76 mm wide.