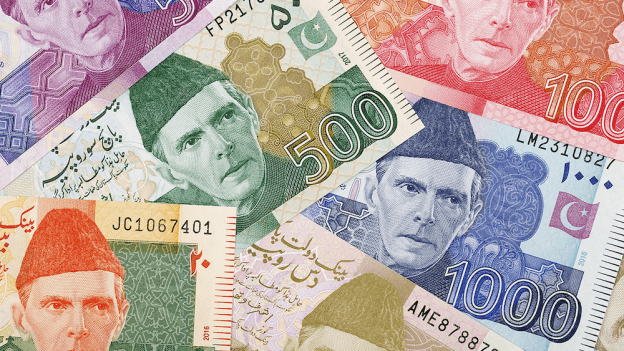 The Islamic Republic of Pakistan is a South Asian country that has the world’s 2nd largest Muslim population. It is bordered by India to the east, Afghanistan to the west, Iran to the southwest, and China to the northeast. Many ancient cultures thrived in Pakistan, including the Indus Valley Civilization of the Bronze Age. It was once part of British India, but Islamic nationalists wanted their own country, so British India was divided into India and Pakistan in 1947. Bangladesh was once part of Pakistan, but separated after the Civil War in 1971. The capital of Pakistan is Islamabad and its largest city is Karachi.

The Pakistani rupee is the national currency of Pakistan. It is divided into 100 paisa and is locally represented as Rs or Rp. The word rupee comes from the Sanskrit word for silver. The Pakistani rupee was first used in 1947, after the country gained independence from Britain. Prior to decimalization in 1961, a rupee was equivalent to 16 annas.

The government of Pakistan is responsible for issuing one rupee banknotes since 1948. However, an emergency family of banknotes that had denominations larger than one rupee were issued under the government in 1948, prior to the establishment of the State Bank of Pakistan.

The 1 rupee banknote is the smallest denomination to be featured on a banknote. The 1 rupee note was replaced by a coin in the 1990s, but it was temporarily reissued in 2001 to use up remaining unissued note stocks. As of 2013, the 1 rupee is the minimum legal tender in Pakistan.

The State Bank of Pakistan was established on May 12, 1948. The bank is responsible for issuing denominations larger than one rupee.

The first family of banknotes that were issued from 1949 to 1967 did not feature any portraits of leaders nor notable historical figures. The notes featured two different landmarks on the front and the back.

The first 100 rupee note to feature Mohammed Ali Jinnah was introduced on December 24, 1957. It had green, purple, and orange colors and measured 166 mm long and 92 mm wide. Aside from Mohammad Ali Jinnah, the front side also featured the State Bank logo. Its reverse side featured the Badshahi Mosque, also known as the Royal Mosque, in Lahore. The note had a solid security thread and a watermark of Mohammed Ali Jinnah. It was also printed by the Pakistan Security Printing Corporation.

During the Civil War in 1971, many Bengals stamped Pakistani notes with “BANGLA DESH” to protest Pakistani rule. Though the Bengals achieved victory on December 16th, Bangladesh declared its independence earlier on April 17th. However as a preventative measure, the Pakistani government declared that all banknotes with the “BANGLA DESH” stamp ceased to be legal tender and withdrew all 100 and 500 rupee notes. After the Civil War, the bank issued a new family of banknotes. These notes had similar designs as the previous family, but the color schemes were changed so that the older notes could be demonetized. Five years later, Bengali text and allusions to the former region were removed from the banknotes.

A commemorative Pakistan 5 rupee note was issued in 1997 to celebrate the Golden Jubilee of independence. It had purple, light green, and orange colors and measurements of 130 mm by 72 mm. Its front side featured Mohammed Ali Jinnah and also a starburst design with an Urdu phrase that translated to “Fifty Year Anniversary of Freedom”. Its reverse side featured the tomb of Shah Rukn-e-Alam in Multan. The note had a solid security thread and a watermark of the Great Leader.

In 2005, a new family of Pakistan banknotes begins to circulate. These notes featured new designs and vibrant colors. In 2015 a coin replaces the 5 rupee note. A year later, the 10 rupee coin also begins to circulate. However, the 10 rupee note is still accepted. The 1,000 and 5,000 rupee notes were also introduced in this family. In 2017, the 500 rupee, 1,000 rupee, and 5,000 rupee notes were updated to include a 10% larger optically variable ink flag, a SICAPROTECT varnish, SICPATALK infrared in, and NEOMAG colored magnetic ink.