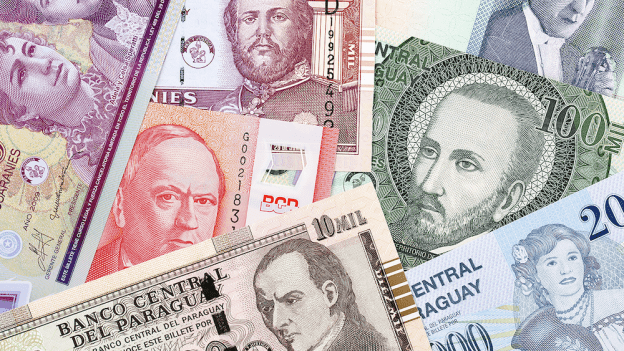 Enclosed by Argentina, Brazil, and Bolivia, the Republic of Paraguay hosts a number of swamplands, chaco, scrubland, and savanna. While it is one of the only two South American landlocked nations, Paraguay still has access to beaches and coasts through the Paraguay and Parana rivers that lead to the Atlantic Ocean. The country’s capital, Asuncion, is where the Government Palace and the Museo del Barro which showcase ñandutí lacework and pre-Columbian ceramic, are situated.

On October 5, 1943, the Paraguay Guarani (PYG) was introduced as the nation’s legal tender, replacing the peso. The first guarani banknotes were released in 1943 in the denominations of 50 centavos, 1, 5, and 10  Guaranis. These were overstamped 50, 100, 500, and 1,000 pesos. Regular guarani banknotes that were printed by Thomas De La Rue were released shortly thereafter. They feature a significant figure in the history of Paraguay on the obverse design. Except for the 500 and 1,000 Guaranis that depict the Oratory of Our Lady of the Assumption and the National Pantheon of Heroes and the Lopez Palace building on their respective reverse design, the banknotes highlight the Banco Central del Paraguay building.

Following the establishment of the Banco Central del Paraguay on March 25, 1952, a new family of banknotes was issued. These banknotes look exactly the same as the 1943 banknotes except that they bear the name of the new bank, solid security threads, and the new authorizing law date. It was only in 1963 that the bank launched a new set of notes bearing new designs and adding the 5,000 and 10,000 Guaranis to the lineup. Banknotes from this set as well as subsequent issues are all sized 157 x 67 mm.

In 1990, the bank introduced its first 50,000 Guarani banknote, and in 1998, it also issued a 100,000 paper bill. In 2009, the Banco Central del Paraguay issued a 2,000 Guarani note on polymer, making it the country’s first polymer banknote. Another banknote family was issued between 2015 and 2017 with the denominations printed in Optically Variable Ink and later on, the banknotes’ Motion threads were changed to 4-mm wide windowed security threads that would shift colors when tilted.