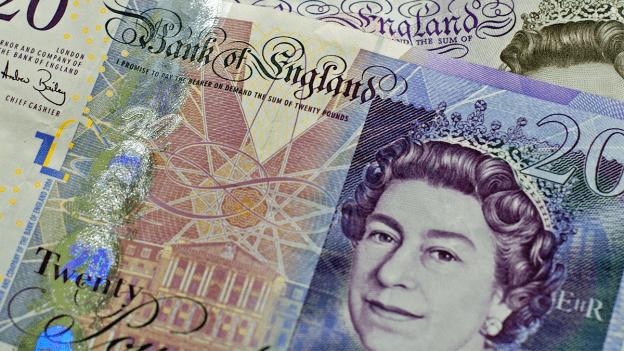 The portrait of Queen Elizabeth II has been on all English banknotes since 1960. This was called the Series D banknotes. Before this series, the English banknotes were nicely printed but only had text and a small image of Britannia. 1960 began what is considered by most as the ‘modern age of banknotes’.

Including the soon-to-be-released polymer 50 Pound Turing banknote, Queen Elizabeth has graced the front of 18 English banknotes. This does not include the UK notes printed for the Channel Islands or overseas territories. And, except for a couple commemoratives, the Queen is not on Irish or Scottish banknotes.

The UK government made the decision to introduce the D-series and highlight famous people from English history on the reverse. The front was always held for a portrait of the Monarch and a large and impressive building. The D-series was unique for the time because it had state-of-the-art security features, were colorful and included a woman- actually two women including QEII. The 10GBP note included a portrait of Florence Nightingale, the famous nurse from the Crimean War. Few women were on banknotes at the time, so this was quite progressive for the time. This series also has one of the most popular fivers- the Wellington 5GBP. Another popular note from this series is the Shakespeare 20GBP. Not only were these notes popular, but they also maintained their counterfeit resistance for more than 20 years they were in circle.

The Series E was released in the early 1990s. By then, the 1 pound note had been converted to a coin and decimalization eliminated the shilling. This series did not have the impressive and universally known characters. With the exception of Charles Dickens on the 10GBP, the characters highlighted on the notes were less well known.

This is interesting because the selection of the people on the banknotes were supposed to be well known and have portraits that would be obvious to most English. Michael Faraday, George Stephenson, Elizabeth Fry and Sir Edward Elgar were hardly household names. Sir John Houblon, the first governor of the Bank of England was probably only known to a few people in banking before he graced the 50 pound banknote. But anyone who had a 50 and looked at this massive portrait on a very large banknote will likely remember his face and curly wig for quite a long time.

In 2007 and then 2011, a Series F was issued but it only focused on the higher denominations. These are the notes that most people have been most familiar until the recent issuance of the Series G polymer banknotes. The bank returned to its roots and focused on famous English people that nearly everyone would be familiar. The 5 GBP was issued first and includes a very traditional portrait of Winston Churchill. After much debate and last minute changes, novelist Jane Austen was chosen for the 10GBP. Joseph Mallord William Turner is present on the 20 pound note. He is a very famous English artist, but maybe not a very familiar person to many.

Alan Turing is an interesting choice for the last denomination. Dr. Turing was virtually forgotten to history but is now understood to have been the father of modern computers and led a team of cryptographers at Bletchley Park during WWII that broke the Enigma code and probably saved millions of lives and shortened the war. His work was kept secret and then he was persecuted for being gay. His story was bright back to modern audiences with the release of the movie The Imitation Gamestarring Benedict Cumberbatch. It is fitting that someone so important and now so well-known is honored by being present on the highest English banknote denominations.