The Dimensions of Money | Why Do Banknotes Come in Different Sizes? 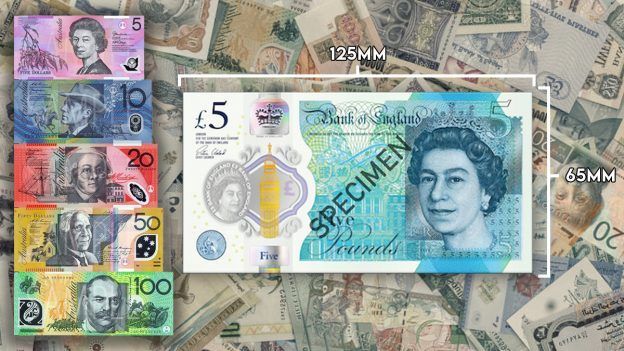 Banknotes around the world come in all different shapes and sizes, and the variation is staggering between how the countries of the world choose to print their currency. Countries have access to robust printing machinery that allows them to print huge quantities of notes according to demand, but these notes have to be designed to the appropriate standard to meet the requirements of the end users and so that they can be printed by the necessary machinery. Ultimately, countries create banknotes because the people of the country need currency in order to engage in the economy, and the purpose of those notes is to help facilitate the movement of goods through the country. This article talks about how countries design their banknotes and determine the size of money.

How to Size a Banknote

As stated above, banknotes are printed for use by citizens in a country in order to facilitate the exchange of goods and services.To understand size requirements for a banknote, imagine you’ve won the lottery and received a huge cheque for $1,000,000.

Can you envision a banknote that size, but worth $1, and that you’re planning to trade for a pack of gum or a coffee? Banknotes have to be practical for daily use.

Wallet fit is one of the most crucial aspects of banknote size. For example, in the Netherlands, citizens were used to banknotes with a height of 76mm. When the 50 Euro note was introduced, many people were concerned that the notes, which had 82mm height, did not fit into a standard wallet. Notes that don’t fit well in wallets experience more wear around the edges, so the dimensions of money are actually crucial for its longevity.

Banknote acceptors like automated teller machines, vending machines, and paid parking terminals can be finicky when it comes to accepting notes. There are up to 8 different orientations with which a banknote can be inserted, and machines are often programmed to accept notes just one way. When different currency dimensions are used, these machines need more ways to recognize bills in order to accept all of the viable notes while rejecting fraud notes. Lack of uniform note sizing can lead to delays at banknote acceptors as frustrated citizens try to pay for their parking or buy a beverage.

At the same time, variation in banknote sizing is actually a feature that is employed to benefit the visually impaired. Everyone has a right to engage in the economy, and persons living with disabilities are not an exception. Many countries, such as Canada and China, have begun printing denominations of currency in braille to benefit the visually impaired. Unfortunately, fewer than 1 in 10 blind children are learning braille today, and as a result this feature is becoming obsolete. Instead, variation in the dimensions of money for different notes is being used to help the visually impaired distinguish between the different denominations of banknotes. Countries using different money sizes to help the blind include Mexico, Pakistan, Switzerland, and countries that use the Euro, among others.

Money dimensions play less of a role in counterfeiting, although one popular security feature uses the size of money to prevent counterfeiting. In the United States, all of the bills are printed the same size and color. These bills can be counterfeited by washing the cotton/fibre material that the bills are printed on and reprinting them with higher denominations – for example, washing a $1 bill and reprinting it to value it at $100. This method of counterfeiting can be entirely prevented by using different currency dimensions for different values of banknote, but as stated above, this can lead to other concerns.

Finally, money processors need to be able to use machines to sort and count volumes of cash efficiently. Small banknotes are often created to service the visually impaired but can pose problems for banknote sorting and counting machines. As a result, the height of banknotes really needs to fall between 65mm and 90mm in order for effective processing to occur.

Despite significant variation in banknote sizing between countries, a look at the constraints on bank note size tells us that only a narrow range of sizes is possible. Most countries do their printing on KBA format printing machines, for which the optimal note size is 73mm height and 133mm. Any deviation from this standard needs to account for the factors mentioned above, and as we’ve seen, variation in bill sizing creates other challenges for currency processors but is a security measure against counterfeits.

The next time you look through your own banknote collection, get a ruler out and think about the thought and effort that went into getting those banknote measurements just right.

2 thoughts on “The Dimensions of Money | Why Do Banknotes Come in Different Sizes?”