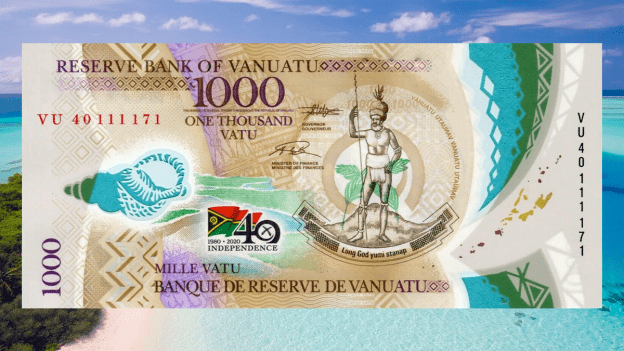 Vanuatu is a small archipelago in the South Pacific. I am sure it is amazingly picturesque. It is one of those countries that were formerly European colonies and then split even further to its local culture. Vanuatu had been part of the New Hebrides administration. In the 1970’s there was an independence push which led to the full independence in 1980.

With a population of around 250,000, Vanuatu does not have a huge annual demand for banknotes. But it has found an interesting way to change its banknotes frequently. It has its printer – Note Printing Australia –  overprint banknotes with design add-ons and serial numbers. One can see this feature on the new 40th Anniversary Commemorative 1000 Vatu.

Vanuatu uses polymer substrates and have sweeping windows. There are also semi opacified areas that represent sea shells. The colors are bright and the themes focus on local culture and local people. The current design of the 1,000 Vatu was first issued in 2014. Each issue year can be identified because the first 2 digits of the serial number are the last two digits of the year. But for the 40th anniversary note has a ‘40’ as the first 2 digits. A patch is also printed on the front with the Vanuatu flag and a large ‘40’. While it is not a totally new note, it is unique and clearly a commemorative. It is a smart way for small companies to collaborate with its printer to produce an effective banknote program without spending a huge amount of money.