Yugoslavia – Hyperinflation in the 1990s 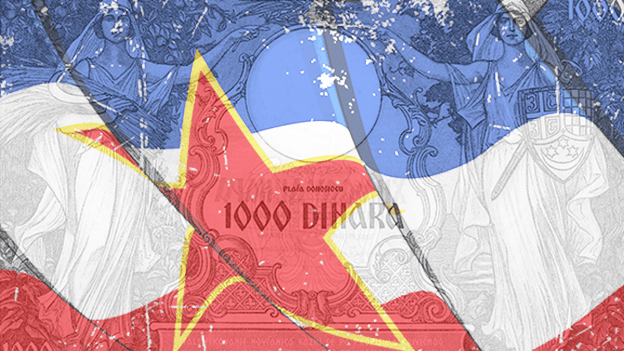 The war in Yugoslavia dominated the news in the early 1990s. With the dissolution of the Soviet Union and a war so close to Western Europe, many people were concerned the war would expand and potentially engulf all of Europe. History was a warning as World War I was ignited in this area. And as with many countries that go through civil unrest, their economy suffered and their currency suffered. By the end of 1993, Yugoslavia had a 500 Billion Dinara banknote. By that time, The Federal Republic of Yugoslavia was a mere shadow of itself and would quickly devolve into new countries.

Yugoslavia was formed after WWI as a combination of several ‘states’ that existed under the Austro-Hungarian Empire.  During the countries earliest years, it used Austro-Hungarian Krone banknotes overstamped with a Provisional Finance Ministry seal.

In 1919, Yugoslavia Dinar notes were issues and circulated at the same time as the Krone, with a 4 Krone to 1 Dinar conversion. The country remained in flux until 1929 when it was officially recognized as the Kingdom of Yugoslavia. During the 1930’s there were several interesting notes released. They seemed to follow a style seen in Greece, France and Italy. God like images are in place in combination with worker vingettes and a watermark in the middle, bottom. A very interesting example is P-33.

After WWII, Yugoslavia became a communist state lead by General Tito. During his rule through 1980 banknotes were printed by Zavod za Izradu Novčanica (ZINB) in Belgrade, Yugoslavia. They followed a design concept typical of other communist countries- simple, focus on workers and words. Even after Tito’s death and the move away from communism, the banknotes remained basic although colors did start to become more vivid.

End of an Era

But by 1990, each of the republics had votes for new governments or full independence. It seemed clear that these peoples were going to split the country and even have a civil war. While the war raged in Bosnia, Croatia and other regions, Serbia and Montenegro formed the Federal Republic of Yugoslavia and continued to issue new Dinara. But with war all around and sanctions from the UN and Europe, the economy faultered leading to hyperinflation and banknotes with lots of zeros. I can’t say that I like any of these notes but for those who like inflation notes, these are a good choice.

In 1994, the dinara was devalued, and a new series called the First Currency Reform Series was created. Still pretty basic and boring. But Yugoslavia only lasted another 8 years, when Yugoslavia was renamed Serbia and Montenegro (and then in 2006 Montenegro split off and formed its own country). This region has certainly suffered over the last 100 years. The 1990s and the period of war and hyperinflation might have been one of the worst, but we can remember the issues by seeing their high denomination banknotes.