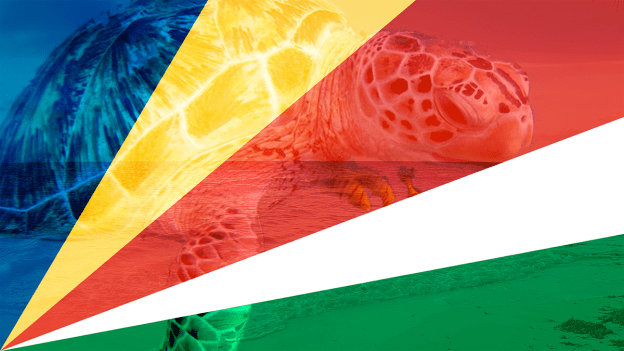 Aldabra is actually an atoll north of Madagascar that is at the southern edge of the Seychelles. However, it is not a country. It is part of Seychelles and is a UNESCO Heritage Site. But it also has a series of banknotes. Well not actual banknotes. There is a series of novelty notes associated with the Aldabra Islands.

Aldabra is a volcanic coral atoll in the Indian Ocean. This means that it is a series of islands made primarily of rough coral that surround a lagoon which was formed by volcanic activities. No one really lives there permanently, as there is no drinkable water. The island is home to giant tortoises and tropic birds. Arab and Portuguese explorers have know about the island since at least the 15th century. It became part of the French Reunion and then came under English protection, and then back to France and then to Mauritius and now part of the Seychelles. The attraction has always been the giant tortoises and the coral.

The tortoises, coral and birds can be seen on the novelty banknotes privately issued in 2017. Also, the novelty notes have no actual value and are not issued by a government bank. It does not appear that the Seychelles government was involved. These notes bring attention to these precious and endangered islands and they are attractive.

The designer used a mature image of Queen Elizabeth II on all 6 denominations. They put half of her portrait on the front and have on the back. As a result, if you put 2 notes font to back next to each other, like magic it completes the portrait. It is a nice gimmick and fun.

Certainly, they are not banknotes but these collector items and if they can bring needed attention to a environmentally sensitive part of the world that is great!